Wade Troutman and the Sharp-tailed Grouse

How a farmer can help birds - 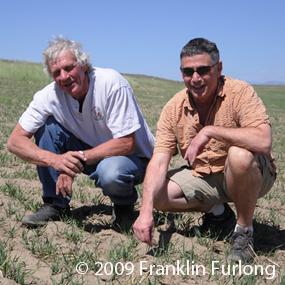 Wade Troutman and the Sharp-tailed Grouse

This is BirdNote.
[Vocalizations of Sharp-tailed Grouse] and crickets as ambient.
Eastern Washington farmer, Wade Troutman, can easily check the market to put a price tag on a bushel of wheat. But how, he asks, do we find the value for the Sharp-Tailed and Greater Sage-Grouse that nest and winter on land his family’s farmed since 1895?
[Vocalizations of Sharp-tailed Grouse]
[Our economic system, Troutman says, doesn’t put a value on conserving the habitat the grouse require.] People in the cities and suburbs do care about these birds. But the burden of providing what the grouse need often falls on the farmer.
“All’s I’m saying is for us to stay in farming and to set aside ground for birds and mammals…we need to have a return…we can’t become second-class citizens living in such poverty, you know…” G1 T15
Wade Troutman manages his farm to protect habitat for the grouse.
“So, we actively manage the biodiversity by these remnant patches, which amount to about 30-40% of the farm.”   G1 T10
The Washington State population of Sharp-tails now stands at fewer than 1,000 birds. Some of these birds survive because Wade Troutman provides sites for courtship, nesting, and wintering on the 6,600 acres he farms.
“…I need people to start placing a real value…on things like Sage  Grouse and Sharp-tails they may never see. [Sage grouse stomping at a  lek]  And recognize that those of us out here are actively managing for  their benefit…”  [Vocalizations of Sharp-tailed Grouse]  G1 T17
Support farmers who protect habitat. Learn more at birdnote.org.
I'm Michael Stein.
###
Calls of the grouse provided by The Macaulay Library at the Cornell Lab of Ornithology, Ithaca, New York. Sharp-tailed Grouse and Greater Sage-Grouse recorded by G.A. Keller. Crickets (unedited) by Nigel Tucker.
Wade Troutman recorded by Chris Peterson June 2009
Producer: John Kessler
Executive Producer: Chris Peterson
© 2010 tune in to nature.org     November 2010     Narrator: Michael Stein 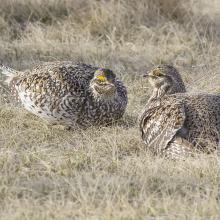 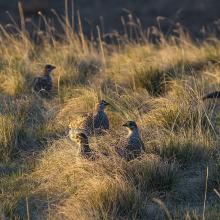 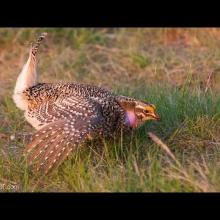