Just how fragile are they? 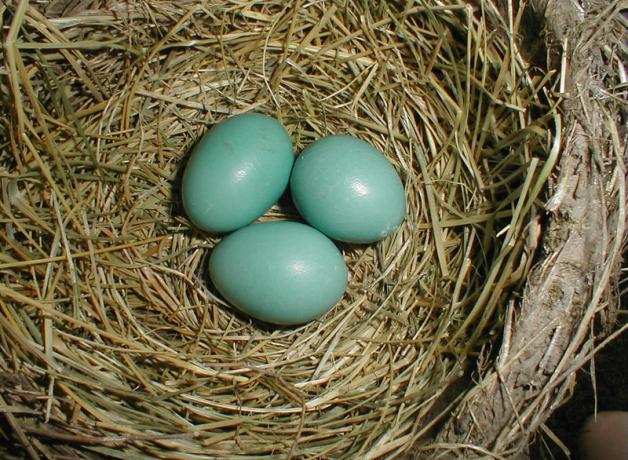 Walking on eggshells usually means dealing with something delicate, fragile. But eggs are far from fragile. An egg has to be strong enough to withstand the weight of an adult bird during incubation. But the tiny, weak baby bird within has to be able to peck its way out. Is it true that if you touch a bird's eggs, the bird will abandon the nest? Nope. But don't do it! You don't want to alert those wily raiders, crows and jays, to that well-kept secret.

BirdNote®
Walking on Eggshells
Written by Ellen Blackstone
This is BirdNote!
Walking on eggshells. When we use that term, we usually mean dealing with something fragile, a delicate situation. But eggs—or at least chicken eggs—are far from fragile. [Cluck-cluck-clucking of chicken]

Take off any rings you might be wearing, and try this. Grab an egg from the refrigerator, and place it in the center of your palm. Wrap your fingers around it. And … squeeze! If you’re like most people, you can just put the egg—whole—back in the refrigerator. [Thunk of refrigerator door]
The eggshell is truly one of nature’s wonders. [Clucking of chicken] Think of it! It has to be strong enough to withstand the weight of an adult bird during incubation. But the tiny, weak baby bird inside has to be able to peck its way out. [Peeping of baby chickens]
So… is there any truth to the old story that if you touch a bird’s eggs, the bird will abandon the nest? Nope. But we absolutely discourage disturbing any bird’s nest. You don’t want to alert those wily nest-raiders, the crows and jays, to that well-kept secret. [Steller's Jay calls]
The US Chicken and Egg Association has approved this message. [Clucking of chicken]
###
Chicken call #58102 provided by The Macaulay Library at the Cornell Lab of Ornithology, Ithaca, New York. Recorded by W.W.H. Gunn. Call of Steller’s Jay #13468 recorded by C.A. Sutherland.
Chick calls provided by soundboard.com
Other ambient audio by Kessler Productions.
BirdNote's theme music was composed and played by Nancy Rumbel and produced by John Kessler.
Producer: John Kessler
Executive Producer: Chris Peterson
© 2016 Tune In to Nature.org     March 2013/2018     Narrator: Michael Stein
ID# eggs-02-2008-03-18-KPLU        eggs-02c
Inspiration from Amazing Birds, by Roger Lederer

Here's an Eggs-periment for the kids, from Scientific AmericanLet us know what you think about BirdNote! 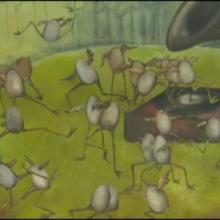