We Draw Strength from Nature 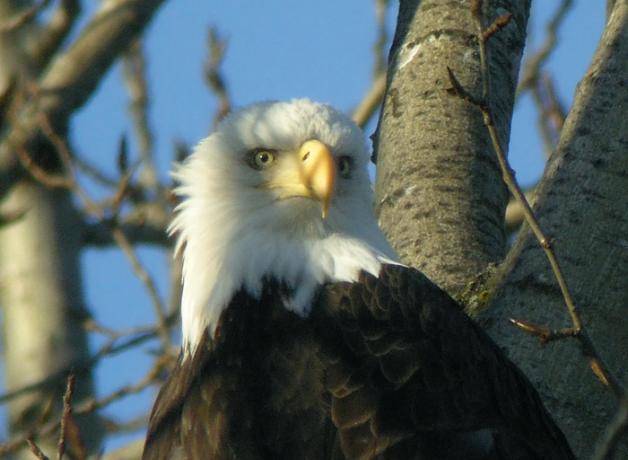 A Bald Eagle that was feeding on the ground suddenly rises up. With two powerful strokes, its massive wings carry it high into a tree, where it lands and looks down. Nature is impersonal, but we feel a connection, don't we? How can we not draw strength from wild creatures we admire?

We Draw Strength from Nature

This is BirdNote.
[Begin music and run selections throughout]
I went to visit an old friend yesterday, a carpenter who’s been in the hospital for months. His muscles have wasted away, and he’s struggling to start the long road back to strength.
I was eager to tell him about a rare encounter. “Remember the big-leaf maple that stands where my driveway enters the woods? Well, the ground slopes there, behind the trunk. Today, when I went by, I startled a Bald Eagle that was feeding on the ground. Suddenly, it rose up from the depths, right in front of me. [Pause for music ] With two powerful strokes, its massive wings carried it high into that maple, where it landed and looked down at me.”
My friend’s eyes glowed as I spoke. Then he grasped a one-inch dowel lying by his bedside. With both hands, ever so slowly, he lifted his arms, in tandem, up, up, over his head.
I know that nature is impersonal, but we feel a connection, don’t we?  How can we not draw strength from wild creatures we admire?
Lift your wings, my friend.
###

Learn more about the Bald Eagle at All About Birds