What Osprey Chicks Reveal About Pollution 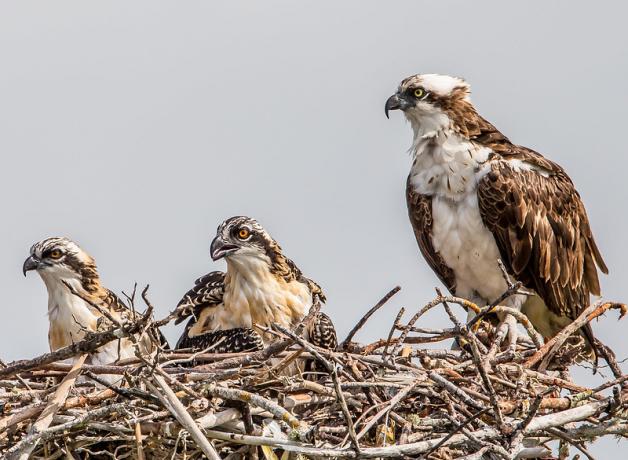 Biologist Erick Greene has been taking blood samples from Osprey chicks in northwest Montana for years. Ospreys eat fish, so toxins in the water become concentrated in their bodies. Their blood offers a window into how pollution moves through the food chain. Finding high mercury levels in Osprey chicks helped Greene trace the toxin’s source.

Hear more about how Montana’s Ospreys are persisting despite pollution on the Threatened podcast.

What Osprey Chicks Reveal About Pollution

This is BirdNote.
[Osprey calls, https://macaulaylibrary.org/asset/229102, 0:22-0:25]
Biologist Erick Greene has been taking blood samples from Osprey chicks in northwest Montana for years.
Erick Greene: [00:04:18] We come with a bucket truck when her babies are, you know, the size of a small cat. And we do an alien abduction. We grab the chicks, bring them down to the ground, and take a very small blood sample.
The Ospreys live near the toxic aftermath of decades of copper mining. Ospreys eat fish, and over time, pollutants found in the water become concentrated in their bodies. Which means their blood offers a window into how pollution moves through the food chain. Greene found surprisingly high levels of mercury in the Osprey chicks.
Erick Greene: The upper limit in human blood is roughly about five parts per billion. And these chicks right here have routinely 250, 300, 350 parts per billion. If you or I walked into St. Pat's right across the river here with those levels of mercury, it would be considered, like, code blue. I mean, the doctors would be freaking out and starting chelation therapy and the whole works.
In short, bad news for the chicks. But the information helped Greene determine the mercury wasn’t coming from the copper mines but instead from abandoned gold and silver mines elsewhere. The baby Ospreys taught researchers that pollution might lie in places they hadn’t expected.
You can hear more about how Montana’s Ospreys are persisting despite pollution on the Threatened podcast. Listen in your podcast app or at BirdNote.org. I’m Ari Daniel.
###
Senior Producer: John Kessler
Production Manager: Allison Wilson
Producer: Mark Bramhill
Associate Producer: Ellen Blackstone
Digital Producer: Conor Gearin
Bird sounds provided by The Macaulay Library of Natural Sounds at the Cornell Lab of Ornithology, Ithaca, New York. Osprey ML 229102 recorded by B. McGuire.
BirdNote’s theme was composed and played by Nancy Rumbel and John Kessler.
© 2021 BirdNote    August 2021    Narrator: Ari Daniel