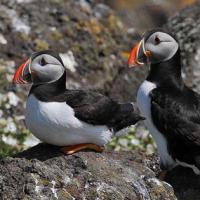 November 19, 2017
What does relocating Caspian Terns from an island in the Columbia River have to do with luring Short-tailed Albatrosses away from an active volcano in Japan? They both use methods of social attraction pioneered by Dr. Stephen Kress. Social attraction utilizes visual cues such as decoys and 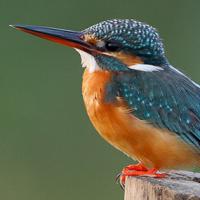 March 13, 2018
High-speed passenger trains in Japan were once a real headache, because their engineering caused a "tunnel boom," a huge boom created by air being pushed out of the tunnel ahead of a train. But the chief engineer for the West Japan Railway Company was a birder, and he’d seen Eurasian 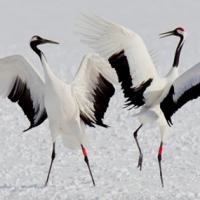 February 14, 2015
On a snow-covered field in northern Japan, two majestic Red-crowned Cranes face one another, raise their heads toward the sky, and call in unison. As they call, the pair begins to dance. They bow to one another, then throw their heads over their backs, then bow again. The pair leaps into 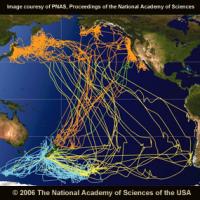 February 24, 2011
Scientists attached tiny electronic tags to Sooty Shearwaters, then tracked the birds' annual oceanic movements. The shearwaters flew enormous, migratory figure-eights from Antarctic waters to the coastal currents off California, Alaska, and Japan - and then returned south. The yearly