It's a LONG trip! 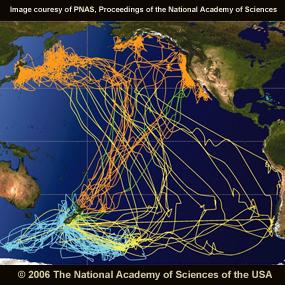 Scientists attached tiny electronic tags to Sooty Shearwaters, then tracked the birds' annual oceanic movements. The shearwaters flew enormous, migratory figure-eights from Antarctic waters to the coastal currents off California, Alaska, and Japan - and then returned south. The yearly migration of Sooty Shearwaters covers 39,000 miles, equal to 1.5 times around the earth. Learn more at PNAS.org. And read about unusual related research on the shearwaters' diet in New Zealand in The Seattle Times.

This is BirdNote!
The annual migrations that many birds make are among nature’s greatest marvels. How stunning that a Ruby-throated Hummingbird – that weighs a mere 1/12 of an ounce – flies non-stop across the Gulf of Mexico, a distance of 500 miles. [Hummingbird wing-hum] Or that our backyard Barn Swallows of summer retreat, in winter, as far as southern South America. [Barn Swallow chatter]
Yet these treks pale in comparison to the yearly migration of Sooty Shearwaters. [Sooty Shearwaters calling]
The Sooty Shearwater is a crow-sized seabird that glides over the oceans on long, slender wings. [Sound of ocean waves] Scientists attached tiny electronic tags to Sooty Shearwaters in the Pacific Ocean, then tracked the birds’ annual movements. The shearwaters flew enormous, migratory figure-eights from Antarctic waters to the coastal currents off California, Alaska, and Japan – and then returned south. The yearly passage traversed 39,000 miles, a distance equal to traveling more than 1½ times around the Earth. [Only Arctic Terns are known to cover more miles in a yearly migration.] [Sound of ocean waves]
And when you consider that the shearwaters’ migration comprises 20 to 30 million birds, the Sooty Shearwaters’ journey is not only one of the longest but likely the most spectacular of all migrations. [Sound of ocean waves; Sooty Shearwaters calling]
You can see a picture of those enormous figure-eights on our website, birdnote.org. Even then, it’s still hard to believe!
###
Bird audio provided by The Macaulay Library of Natural Sounds at the Cornell Lab of Ornithology, Ithaca, New York. Barn Swallow recorded by G.A. Keller. Sooty Shearwater recorded by F.N. Robinson.
Ruby-throated Hummingbird wing-beats recorded by Martyn Stewart, NatureSound.org
Producer: John Kessler
Executive Producer: Chris Peterson
© 2011 Tune In to Nature.org      February 2011 Narrator: Michael Stein