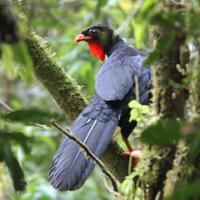 July 29, 2012
High in the mountains of Chiapas, the southernmost state of Mexico, a male Highland Guan is performing his territorial display. The Highland Guan perches on a tree-branch, whistles, and then glides on vibrating wings. The resulting wondrous sound is like no other. The bird’s display 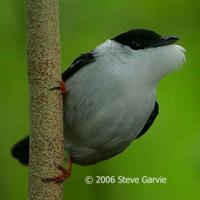 Manakins Make Their Own Fireworks

July 4, 2017
The White-bearded Manakin lives in Trinidad and throughout much of South America. The males court females by snapping their wings with firecracker-like pops. A flurry of males flits rapidly back and forth from one slender, bare sapling to another, a foot above the ground. When the male 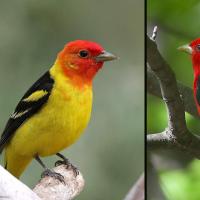 April 7, 2021
This Scarlet Tanager (R), its cousin the Western Tanager (L), and your latte have a connection. Much of the birds' prime wintering habitat has been turned into coffee plantations. When shade-giving trees are cut down to grow coffee in direct sunlight, the tanagers' winter habitat is also 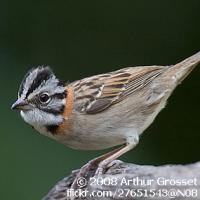 October 1, 2017
The song Tico-Tico no Fuba, like Carmen Miranda, came to us from Brazil. Believe it or not, the song is about a bird. The Portuguese lyrics tell the story of the tico-tico, a local name for the Rufous-collared Sparrow. Like so many birds, tico-tico was named for its song. In the song, the 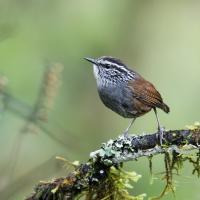 March 19, 2021
Gray-breasted Wood-Wrens sing a duet. Each sings a different phrase, yet the phrases are so closely linked, it sounds like one song. Such singing is called antiphonal song. The pairs use song to stake out and hold breeding territories. Dueting is most typical of birds that live in dense