Manakins Make Their Own Fireworks 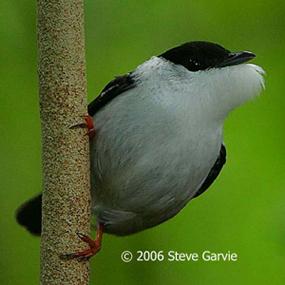 The White-bearded Manakin lives in Trinidad and throughout much of South America. The males court females by snapping their wings with firecracker-like pops. A flurry of males flits rapidly back and forth from one slender, bare sapling to another, a foot above the ground. When the male spots the female nearby, he slides down an upright twig, his head held downward, wings whirling, white chin-feathers thrust out like a beard.

Look closely and you’ll see a dozen or so small, rotund birds. Male White-bearded Manakins look like black-and-white tennis balls with short tails and bright orange legs. With loud wing-snaps, a flurry of males flit rapidly back and forth from one slender, bare sapling to another. It’s like a busy avian pinball game a foot above the ground.

A female approaches – another little, round bird, this time feathered in green. A male spots her. Like a fireman, he slides down an upright twig, head down, wings whirling, white chin-feathers thrust out like a beard. All this and more, to gain mating rights. 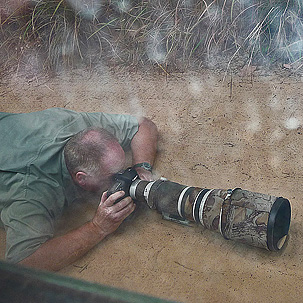 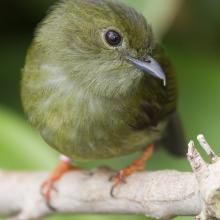 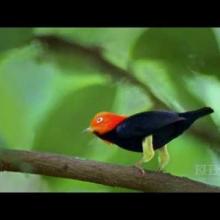