Featuring photos from a few of our hundreds of photo contributors 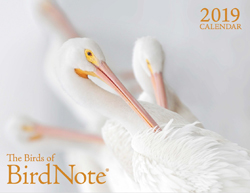 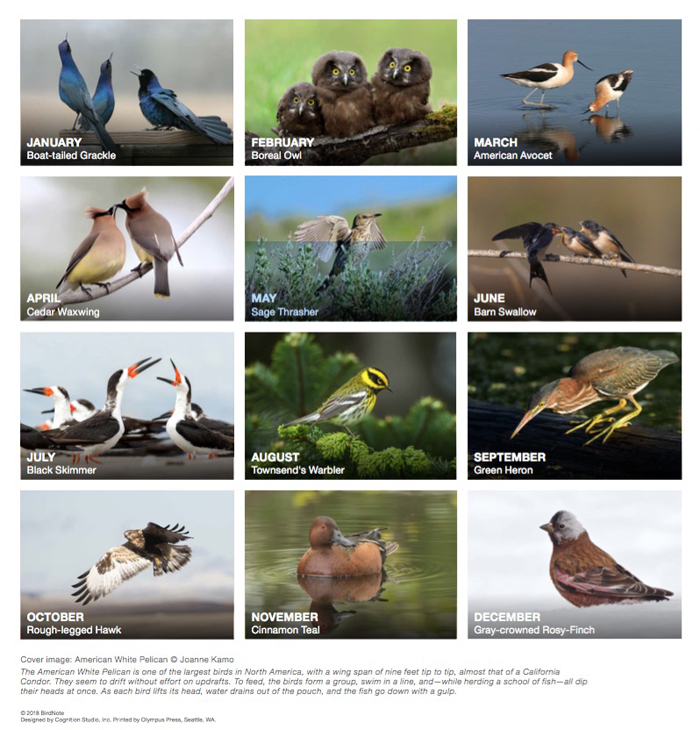 The 2019 Birds of BirdNote calendar features images from 17 long-time BirdNote photo contributors. You can learn more about each one by clicking on his or her name. From John Garp Harrison, an independent bookseller, and his friend and fellow photographer, Kim Nagy, who often visit the Mount Auburn Cemetery in the Boston area (and even wrote a book about it!), to two birders in the Houston area, Joanne Kamo and Greg Lavaty, to a law professor at Stanford University, Tom Grey, now retired.

Seven regular contributors live in the Pacific Northwest, where BirdNote got its start. They are:
Mike Hamilton, a retired Boeing engineer
Gregg Thompson, a biologist who worked with Woodland Park Zoo
Dory Hamlyn, retired teacher and avid BirdNote traveler
Mick Thompson, board member and chapter photographer at Eastside Audubon Society
Jerry McFarland, who was born and raised in Pennsylvania and now calls Eastern Washington home
Tom Sanders, who supports conservation organizations in protection of birds' habitats
Tom Munson, who spends most of his time on the back roads of Eastern Washington.

At the opposite corner of the country, Tara Tanaka tends her 45-acre refuge with 275 Wood Stork nests in her backyard swamp in Tallahassee, Florida. Also in Florida, Kenneth Cole Schneider follows a Bald Eagle nest throughout the year. Taiwan native Jerry Ting is a frequent contributor to Audubon chapters and to online birding groups in the San Francisco East Bay Area. Nick Saunders was born in the United Kingdom and now calls Saskatchewan home. Even farther afield, Francesco Veronesi of Milan, Italy, has photographed more than 4,000 species of birds.

We have been thrilled to feature the work of these remarkable contributors to BirdNote. And we are grateful to Paul Bannick, Gerrit Vyn, and the hundreds of others who have been so generous with their work since BirdNote first aired in 2005.