Install a nest box for these feisty falcons! 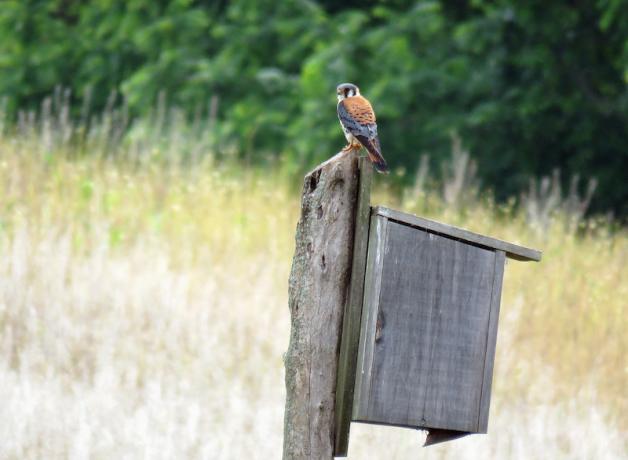 American Kestrels are the smallest falcons in the country. But they're such colorful and charismatic little birds -- they make up for their size with their attitude! In the last 50 years, American Kestrel populations across North America have declined by almost half. The lack of nesting cavities is one big reason. So the American Kestrel Partnership invites you to install - and monitor - a nestbox for these beautiful, feisty birds. Great citizen science project!

Check out the beautiful photos in the Sights & Sounds gallery, below.

[Call of the American Kestrel]

If you’d like to help bring back our smallest falcon, The American Kestrel Partnership has a place for you!

In the last 50 years, kestrel populations across North America have declined by almost half. The lack of nesting cavities is one big reason. So the Partnership is welcoming citizen scientists to install and monitor nesting boxes for these beautiful, feisty birds.

“Our goal is to make it a long-term project that can give many, many, many generations of …youth and adults first-hand, on-the-ground, out-in-the-field experience in managing and studying wildlife.  …Given the population declines over the last half century …we need this information to understand why those are happening and reverse and mitigate for them.

I think what really brings it home for people…is when they get that first pair of breeding kestrels in their nest box.  Seeing the male bring prey, bring these courtships gifts to the female and seeing her respond …and then start a family together…They’re such colorful and charismatic little birds, for their lack of size compared with other North American birds of prey species …they very much make up for it with attitude.  ... [Call of American Kestrel] They will not hesitate to chase off other birds of prey or magpies or other potential predators from their nesting territories. They’re just a joy to observe. …They’re really just a great species for engaging people in science and producing useful and informative and critical data in the meantime.”

To learn how to get started, come to our website, birdnote.org. 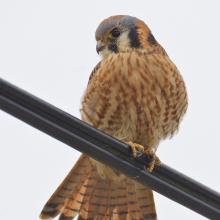 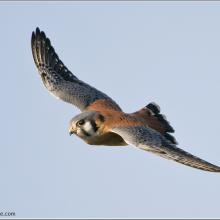