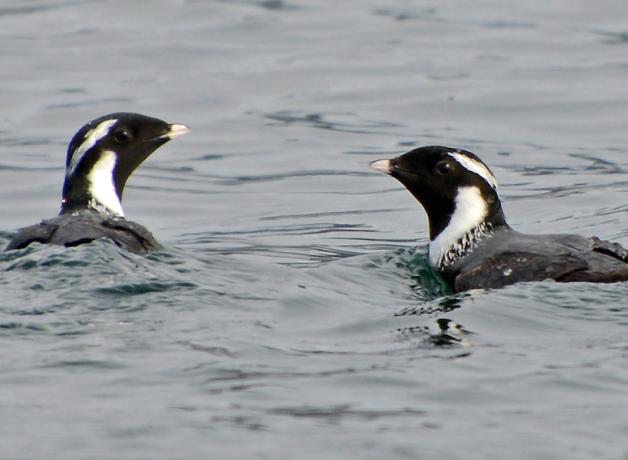 We're used to birds migrating north to south and south to north. But the Ancient Murrelet migrates east to west and back across the North Pacific. These plump seabirds nest in colonies in old-growth forests, in burrows and rock crevices. But where do they go in winter? After breeding, many Ancient Murrelets migrate westward. Around November, they end up in the Yellow Sea or the Sea of Japan. Two months after that, they head back, reaching British Columbia in March, and the cycle begins anew.

Where Ancient Murrelets Go in Winter

This is BirdNote.
[Calls of Ancient Murrelets Macaulay LNS 132011]
Winter to summer, summer to winter, we're used to birds migrating north to south and south to north. But there’s one bird —as far as we know, only one — that migrates east to west and back across the North Pacific. It’s the Ancient Murrelet.
[Calls of Ancient Murrelets LNS 132011]
Ancient Murrelets are plump little black-and-gray seabirds. But they nest in colonies in old-growth forests, in burrows and rock crevices. Just days after the chicks hatch, the adults lead them to sea and feed them for the first time. Few other seabird chicks leave the nest so early. [Calls of Ancient Murrelets Macaulay LNS 132012]
And where do these birds go in winter?
[Sounds of ocean waves/wind]
Scientists in the Haida Gwaii archipelago of British Columbia, Canada, decided to find out. So in 2013, they fitted 50 Ancient Murrelets with geolocators. A year later, data revealed that in June or July, after breeding, many birds migrate westward across the northern Pacific Ocean. 5,000 miles later, around November, they end up in the Yellow Sea or the Sea of Japan. And two months after that, they head back, reaching Haida Gwaii in March. Where they start getting ready for breeding, and the cycle begins anew.
If you ever miss a BirdNote, you can always get the latest episode. Just tell your smart speaker, "Play the podcast BirdNote. Learn more on our website, BirdNote.org.
###
Bird sounds provided by The Macaulay Library of Natural Sounds at the Cornell Lab of Ornithology, Ithaca, New York. 132011 and 132012 recorded by Sampath S. Seneviratne. "Ship in waves" recorded by John Kessler.
BirdNote’s theme music was composed and played by Nancy Rumbel and John Kessler.
Producer: John Kessler
Executive Producer: Sallie Bodie
© 2016 Tune In to Nature.org   October 2016 / 2020 / 2022  Narrator: Mary McCann 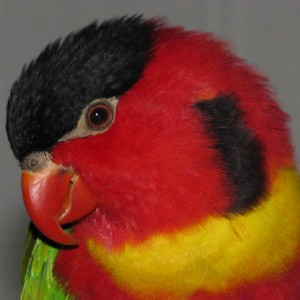