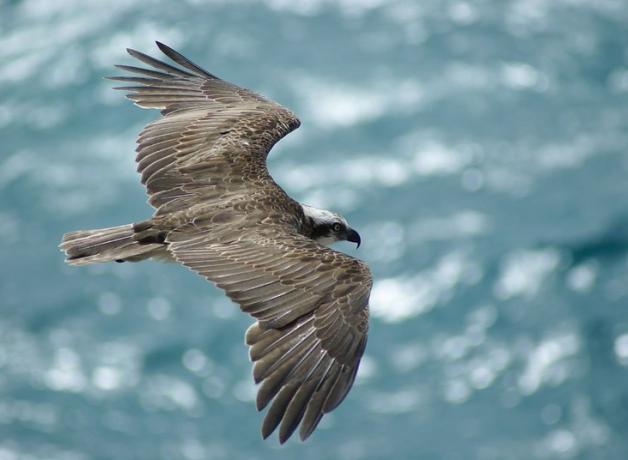 In this BirdNoir mystery, the private eye fields a call from a woman who says a large bird that looks like a Bald Eagle stole a Rainbow Trout from her pond. Through a process of elimination, the detective is able to rule out a few likely suspects and arrive at the probable answer. When you think you’ve spotted an eagle, remember to examine all the evidence.

It was late when the dame called me...

Dame: Oh Michael, you have to help me!

I could tell she was desperate...

Dame: I just saw a big, brown bird with a light head fly off with a Rainbow Trout from my pond — a fish murder, Michael! I think it was a Bald Eagle. Can you help me find him?

Not so fast, I thought. People are often quick to assume they’ve seen a Bald Eagle, but there were some other suspects to rule out. Sometimes people see the big wings of a Turkey Vulture and think it’s an eagle — did it hold its wings flat, or did they lift up in a “V” shape like a paper airplane?

Dame: Those wings were as flat as a pancake!

All right, so not a vulture then… ah! But when this bird passed overhead, did the wings have a kinked shape, like the letter “M,” or were they straight and squared off?

Dame: It looked just like a letter M! M for murder, that is!

Aha! We’ve found our fish-killer — it was an Osprey! A likely suspect. Those birds love boosting fish from lakes and ponds for their dinner.

When you think you’ve spotted an eagle, remember to examine all the evidence.

Osprey - More at All About BirdsBe a Better Birder: Hawk and Raptor Identification | Bird AcademyRaptor ID Fact Sheets | HawkWatch InternationalLook Up! An Introduction to Identifying Raptors in Flight | Audubon