Why won’t this turkey leave the car alone? 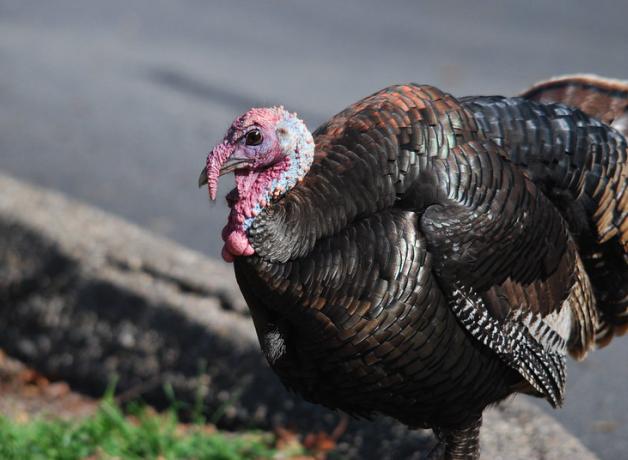 In this episode of BirdNoir, the private eye gets a call from H. Jon Benjamin about unusual Wild Turkey behavior. A male turkey (known as a “tom”) won’t leave his car alone. He keeps tapping his beak on the car. Then the turkey starts circling the house and looking in all the windows. The private eye reveals how things look from the turkey’s perspective, which points the way to a possible solution.

Wild Turkeys are real city slickers nowadays, strutting around parks and lawns. But sometimes they act a little strange.

H. Jon Benjamin: Yeah, I just chased him off! A big male tom turkey, showing off his tail feathers! He was tapping his beak on the car for hours!

H. Jon Benjamin: He’s circling the house and staring in all the windows. Is this turkey hunting me, Michael?!

Probably not. What do you think the tom sees in your windows?

He sees his own reflection. Wild Turkeys are breeding, and the toms are looking out for rival males. His mirror images on the shiny car and the windows look like another turkey.

H. Jon Benjamin: You’re kidding. Is there anything I can do?

Sure, just cover up your car and coat your home’s windows with some soapy water to make them less reflective. That way your car stays safe and the turkey stays focused on courting.

My favorite cases are the ones that end well for both the people and the birds. I’m Michael Stein, Private Eye.

H. Jon Benjamin: Michael, he got in the car, he’s driving my car away! The turkey just stole my car! [tire screech]