Birds on the March with Army Ants 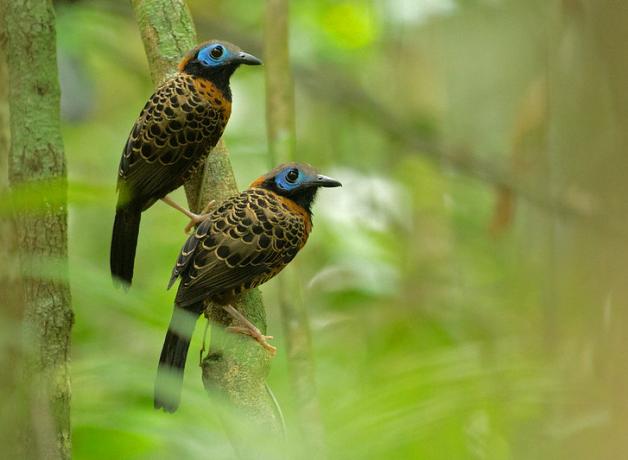 As thousands of army ants march through a rainforest in Panama looking for food, countless insects try to escape. Antbirds follow the ants, waiting for flying insects to leave their hiding spots so they can swoop down and catch them. About 300 species of animals, including 29 bird species, depend on army ants for their survival. It’s thought to be the largest association of animals tied to a single species in the world.

Birds on the March with Army Ants

In Panama, thousands of army ants on the march, looking for prey, are a fearsome sight.

As the ants pass through the leaf litter, they stir up countless grasshoppers, cockroaches, beetles, and even lizards that flee in terror. Flying insects may escape the ant infantry, but they’re no match for the aerial threat from this Ocellated Antbird.

Clinging to a thin plant stem above the fray, the blue-faced Ocellated Antbird waits for flying insects to leave their hiding spots, then swoops in to catch them.

As many as 29 bird species have such a tight bond with the ants that they can’t survive without them. They have to find an army ant column to follow every day. And birds aren’t the only group of animals that need the ants. Scientists have estimated that about 300 species of animals survive only by sticking with army ants. From tiny mites clinging to the ants to butterflies that feed on antbird droppings, it’s thought to be the largest association of animals tied to a single species in the world.

Rainforest fragmentation is a big threat to army ants and their followers, which need large expanses of forest to find enough food. Learn how you can help support conservation efforts in Panama and beyond at our website, BirdNote dot org.