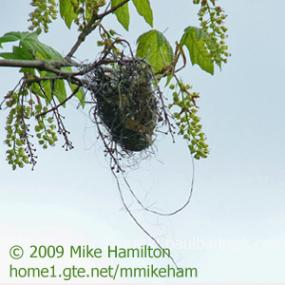 The Bullock's Oriole is the only member of the oriole family that nests in the Northwest. With a slender, sharply pointed bill, the oriole weaves a marvelous pouch-like nest that hangs suspended from its upper rim. The nest hangs downward four to eight inches. The female weaves together long, flexible strands of grass - but also adds in man-made materials she finds. To get a better look at the nest, click "Enlarge." Learn more about the Bullock's Oriole at Cornell's All About Birds.

This is BirdNote!
[Bullock’s Oriole song]
In yesterday’s BirdNote, we met the Bullock’s Oriole as it emerged with a flash of orange feathers from its well concealed, tree-top nest. [Bullock’s Oriole song]
The Bullock’s Oriole is the only member of the oriole family – there are 27 species in the New World – to nest in the Northwest. [Bullock’s Oriole song] Not only are most of these birds vividly colorful, but they are among the world’s most accomplished nest-builders. With slender, sharply pointed bills, orioles weave marvelous pouch-like nests that hang suspended from their upper rims.
[Bullock’s Oriole song]
You can spot these hanging nests most easily in the cooler months, when the trees have lost their leaves. One place to look east of the Cascades is in the cottonwoods of the Wenatchee City Park along the Columbia River. The nests resemble a woven cup or pouch, hanging downward four to eight inches. The female builds the nest in about six days, meticulously weaving together long, flexible strands of grass – but also adding in man-made materials close at hand. A careful look at a Bullock’s Oriole’s nest often reveals bits of yarn, fishing line, string from hay-bales, and even the colorful ribbon the wind carried away from a backyard birthday party.
For more of the Bullock’s Oriole’s story than we can tell here, come to birdnote.org.
###
Written by Bob Sundstrom
Bullock’s Oriole song provided by The Macaulay Library of Natural Sounds at the Cornell Lab of Ornithology, Ithaca, New York.  Recorded by G.A. Keller.
Producer:  John Kessler
Executive Producer:  Chris Peterson
© 2009 Tune In to Nature.org    Revised for July 2009

Learn more about the Bullock's Oriole at All About Birds 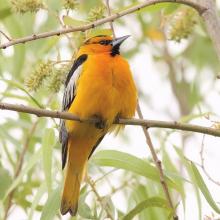 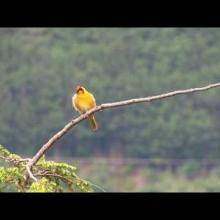 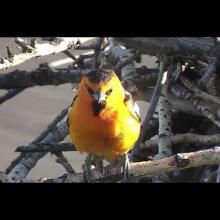 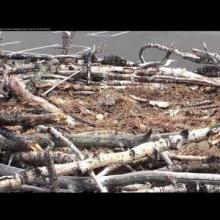