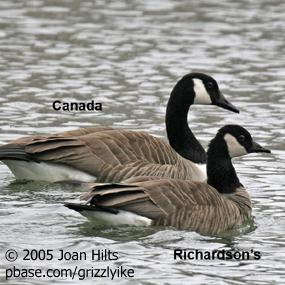 Not only do Cackling Geese sound different, but they also look different from Canada Geese, and their DNA is different. The Cackling Goose was defined in 2004 as a species separate from the Canada Goose.

This is BirdNote!
[Flock of large Canada Geese]
Autumn is in the air, with the familiar honking of Canada Geese passing overhead. But during migration we sometimes also hear this sound. [Flock of Cackling Geese] Who’s making it?
This is a flock of Cackling Geese, a species similar to the Canada Goose that breeds farther north and winters commonly along the Pacific coast. In Washington, you can see them migrating in large numbers, often with Canada Geese but in separate flocks.
Let’s compare their calls—first the Canadas [Canada Geese honking] and now the Cackling [Cackling Goose calls]
Not only do Cackling Geese sound different, they look different from Canadas. They are smaller, with smaller bills, readily distinguished in the field. Of importance to those who oversee bird classification, their DNA is also different.
You won’t find the Cackling Goose in most bird books, as it was defined only recently as a species separate from the Canada Goose. Changes such as this occur when published research convinces the American Ornithologists’ Union that a change is warranted.
Let’s listen one more time to the Cackling Geese. [Cackling Goose calls]
BirdNote is brought to you by Seattle Audubon and your local Audubon. I’m Frank Corrado.
###
Bird audio provided by The Macaulay Library of Natural Sounds at the Cornell Lab of Ornithology, Ithaca, New York. Cackling Geese recorded by G.A. Keller.  Canada Geese recorded by W.W.H. Gunn
Producer: John Kessler
Executive Producer: Chris Peterson
© Seattle Audubon 11/02/06 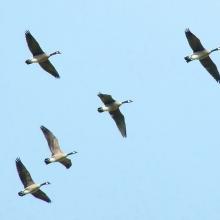 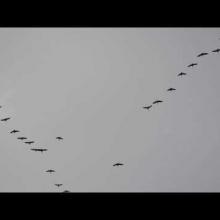 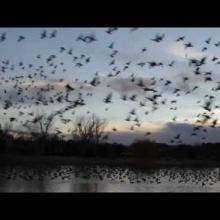