Chorus Line in the Sky 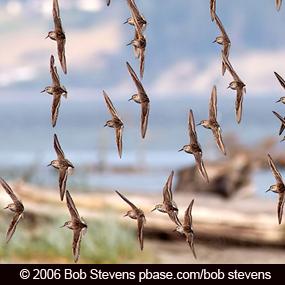 A flock of small shorebirds (like these Western Sandpipers) twists and turns, glittering in the sky. When threatened by a falcon, these birds take to the air, flying so close together that it's hard for a predator to capture one. A bird at one edge turns toward the middle, and a wave sweeps across the entire flock in less than a second.

Chorus Line in the Sky

This is BirdNote!
[Chattering of Dunlin flock]
What is that cloud low in the autumn sky, shape-shifting as you watch from a beach or mudflat, suddenly flashing from dark to light? It’s a cloud of small sandpipers called Dunlins. [Chattering of Dunlin flock] When threatened by a falcon, for instance, Dunlins take to the air, flying so close together that it’s hard for a predator to capture one. The Dunlins’ synchronous twisting-and-turning is a marvel of aerial acrobatics, with the birds alternately flashing brown backs and white bellies. The speed of change is breathtaking, with hundreds of birds turning simultaneously.
[Chattering of Dunlin flock] A researcher, curious about the lack of midair collisions – and speculating about extrasensory communication – filmed a few of these flocks. He found that a bird at one edge turns toward the middle, and a wave sweeps across the entire flock in less than a second. Like a member of a chorus-line, each bird sees the movement beginning to happen and makes the appropriate response.
[Chattering of Dunlin flock]
To see that chorus-line of Dunlin, begin at our website, BirdNote.org. Also sign up for the podcast or weekly preview email. That’s BirdNote.org. I’m Mary McCann.
### 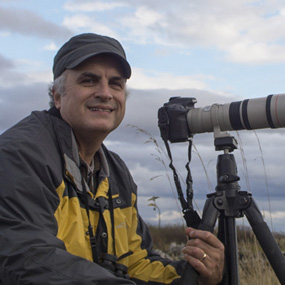