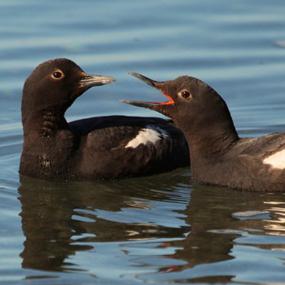 Govinda Rosling, co-coordinator of the Pigeon Guillemot Research Group, is one of 60 volunteer citizen scientists who dedicate their time during the summer months to survey birds at 25 breeding colonies. The guillemots are an indicator species -- their health really echoes the overall health of the Salish Sea. Citizen scientists provide detailed information. They help us understand how human activities affect the ebb and flow of wildlife populations.
Thank you, Govinda, & all the volunteers of the Pigeon Guillemot Research Group!

This is BirdNote!
[Lapping of waves + calls of Pigeon Guillemots]
It’s early morning on Whidbey Island in Puget Sound. We’re monitoring a colony of Pigeon Guillemots – black and white seabirds with bright red feet. How many birds are in the colony? What prey are they bringing to their offspring waiting in burrows in the cliffs? How often?
[Calls of Pigeon Guillemots]
Govinda Rosling, co-coordinator of the Pigeon Guillemot Research Group, is one of 60 volunteers who dedicate time during summer months to surveying birds at 25 breeding colonies. It’s their 9th season.

“We’re looking at their populations... how many birds are coming. It’s been very consistent – about a thousand every year. So we just want to keep tabs on their population and just build a data baseline of where they are. We consider them an indicator species, so their health really echoes the overall health of the Salish Sea. [We know that if their numbers go down then we have a problem.]”

For Govinda, the guillemots symbolize a place and a way of life important to her.
“Just entering the field of ornithology has been a new chapter in my life and I really wanted to mark this, permanently I guess, with a tattoo of a Pigeon Guillemot, which is on my left arm. These birds have certainly touched me… deeply.”

Citizen scientists provide detailed information. They help us understand how our activities affect the ebb and flow of wildlife populations.
Come join us on the beach! Peek into a burrow, or watch a Pigeon Guillemot -- a better swimmer than flyer -- land on the water in a kind of belly flop. See photos at birdnote.org.
[Waves + calls of Pigeon Guillemots]
###
Bird sounds provided by The Macaulay Library of Natural Sounds at the Cornell Lab of Ornithology, Ithaca, New York. Calls of Pigeon Guillemots [137868] recorded by Gerrit Vyn.
Ambient PIGU calling and waves recorded by C. Peterson on site, MV Tracks 284 & 296.
BirdNote’s theme music was composed and played by Nancy Rumbel and John Kessler.
Producer: John Kessler
Executive Producer: Chris Peterson
© 2013 Tune In to Nature.org    September 2013   Narrator: Michael Stein
ID#   PIGU-03-2013-09-06  PIGU-03     Marantz V Tracks 266 & 277

Learn more at PigeonGuillemot.orgBe sure to see Govinda's photos of the projectCheck out Whidbey AudubonPigeon Guillemot - More at All About BirdsWhat's the Salish Sea? Find out! 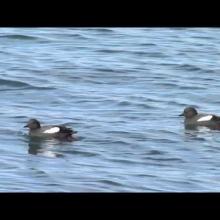