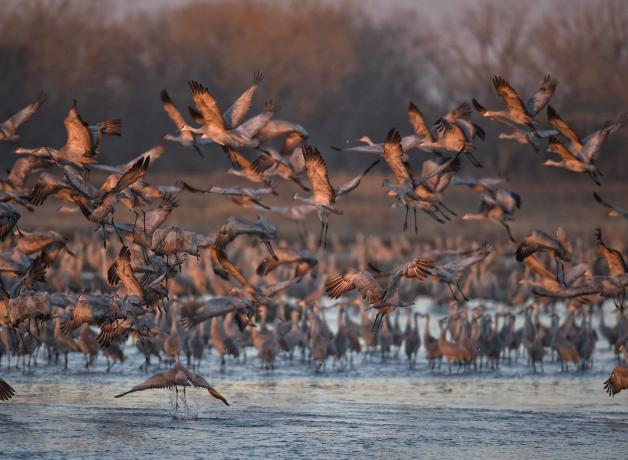 Every March, Sandhill Cranes return to the Platte River in Nebraska, on their way to nesting grounds in coastal Alaska, northern Canada, and Siberia. Birdwatchers come from all over and contribute mightily to the state's economy - as much as $30 million per year. In addition to being of intrinsic value, great beauty, and endless fascination, birds provide significant revenue to a growing number of American communities. Around the country, there are now more than 60 birding festivals. Is there a festival near you? Visit BirdWatchersDigest.com to find one.

BirdNote®
Cranes Bring Economic Benefit to the Platte
Written by Todd Peterson
This is BirdNote.
[Bugling calls of Sandhill Cranes]
Not only are we hearing the sound of one of nature’s great spectacles, we’re hearing the sound of money.
Every March, hundreds of thousands of Sandhill Cranes return to the middle Platte River in Nebraska. They’re on their way to nesting grounds in coastal Alaska, northern Canada and Siberia. During the day, the birds feed in cornfields and flooded meadows. At dusk, they return to the safety of the shallow river. Wildlife watchers from around the world migrate to the Platte to witness the return of the cranes. [Cranes bugling]
During their stay in Nebraska, birdwatchers contribute mightily to the state’s economy. “Over 90,000 visitors travel to the Platte River Valley each spring and add about $30 million to the local economy.”1 More than 60% of the revenue from crane-watching comes from out-of-state visitors.2
[Sound of restaurant and cash register]
Around the country, there are now more than 60 birding festivals, up from only a handful twenty five years ago.3 So in addition to being of intrinsic value, great beauty, and endless fascination, birds provide significant revenue to a growing number of American communities.
[Cranes bugling]
Find a festival near you, on our website, birdnote.org
###
Sounds of provided by The Macaulay Library of Natural Sounds at the Cornell Lab of Ornithology, Ithaca, New York. Recorded by A.A. Allen.
Restaurant sound effects provided by Kessler Productions
Producer: John Kessler
Executive Producer: Chris Peterson
© 2013 Tune In to Nature.org     March 2013     Narrator:  Michael Stein
ID# SotB-SACR-01-2011-03-11
1/ Priority Information Needs for Sandhill Cranes: A Funding Strategy. Developed by the Association of Fish and Wildlife Agencies’ Migratory Shore and Upland Game Bird Support Task Force.  October 9, 2009.
2/. “History and Economic Impact of Crane-Watching in Central Nebraska.” Proceedings of the North American Crane Workshop 6, 1992. Pages 33-37. North American Crane Working Group. Grand Island, Nebraska.
3/ The Economic Impact of Wildlife Watching On the Platte River in Nebraska. Fermata Inc. Ted Lee Eubanks, Jr. Robert B. Ditton, Ph.D., John R. Stoll, Ph.D. Prepared for the U.S. Environmental Protection Agency, Region VII. February 15, 1998.

The Smithsonian Magazine has moreFind a birding festival near you at BirdWatchersDigest.comThere's more at AudubonMagazine.org!Sandhill Cranes - More at All About Birds 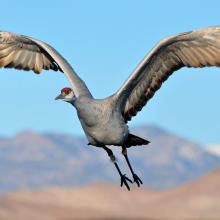 All Aboard to See Whooping Cranes!