The Demise of the Passenger Pigeon

How could a population in the billions go extinct? 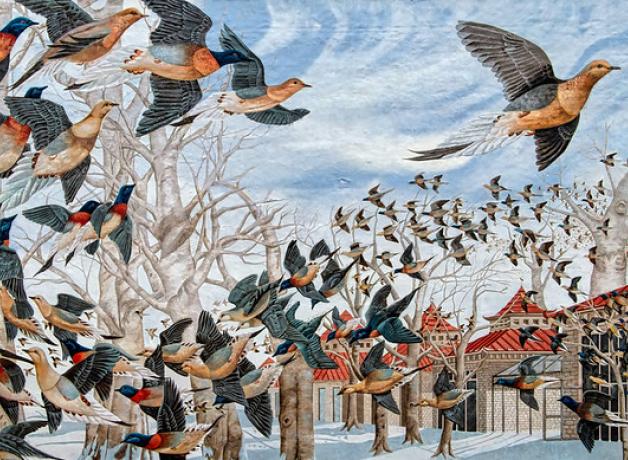 On September 1, 1914, Martha, the last known Passenger Pigeon, died in the Cincinnati Zoo. It’s hard to believe there were billions of Passenger Pigeons in the early nineteenth century.

By 1900, there were none left in the wild. The last Passenger Pigeon became a symbol of how easily we can devastate a seemingly boundless natural population. But how did it happen? Recent research may shed new light on this extinction.

On September 1st, 1914, at 1pm, the last known Passenger Pigeon died in the Cincinnati Zoo. One hundred years later, recent research may shed new light on this most famous extinction in our history.

The back story is well known: in the early nineteenth century, there were literally billions of Passenger Pigeons across the Eastern forests of the United States. By 1900, there were none left in the wild. How did such a population collapse happen?

The new research used an ecological model to show that the number of wild Passenger Pigeons probably fluctuated naturally, as their primary foods – acorns and other nuts – also waxed and waned.

Analysis of DNA from Passenger Pigeons in museum collections also suggested that Passenger Pigeon numbers may have varied as much as a thousand-fold over time. Sometimes, there’d be a few million birds, sometimes the several billion seen by John James Audubon in the early 1800s.

So huge cycles in population size were normal for the Passenger Pigeon. And typically, over time they’d rebound. But the pressures of living alongside increasing numbers of humans made that impossible this time around. Hunting on a vast scale, disruption of nesting areas, and habitat loss meant that there was no way back.

And the last Passenger Pigeon became a symbol of how easily we can devastate a seemingly boundless natural population.