Earthworms - A Superfood in Cold Storage 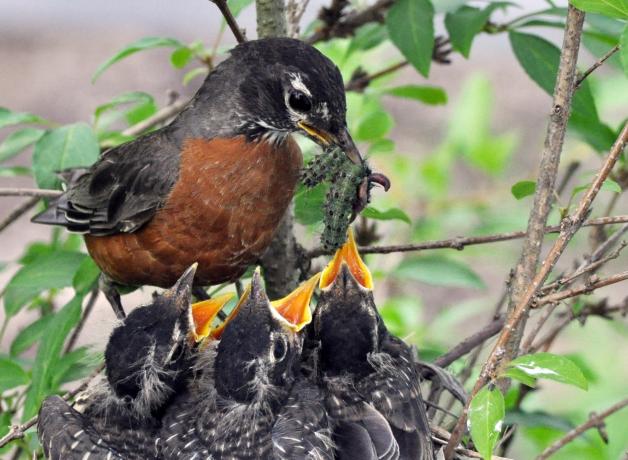 This American Robin has caterpillars and an earthworm in its beak. But which food source is the real prize? Everyday earthworms are higher in protein than beef or chicken. You’d have to eat about a pound of soybeans to equal the protein in just three ounces of earthworms. They’re also high in calcium and easy to catch, compared to crickets or butterflies. Put all that together and you have a superfood for birds — especially the youngsters.
Support for BirdNote comes from American Bird Conservancy and Bringing Back the Birds, a photo book by Owen Deutsch on the importance of protecting birdscapes. Available at Amazon.com.

Earthworms – A Superfood in Cold Storage

A robin tugging an earthworm from the ground in spring and summer is the quintessential image of a backyard bird. But as fall gives way to winter, many earthworms in cooler parts of the country retreat deeper into the soil, and warmer realms beyond the robin’s reach. At this time of year, these normally solitary birds flock together in an adaptive strategy that makes it easier to find fruits and berries on widely scattered trees and shrubs. [American Robin http://macaulaylibrary.org/audio/207168]

With spring, the ground begins to warm, though. The robins start to notice slight movements in the soil from the worms’ burrows – and once again seek out these nutritious invertebrates. Everyday earthworms are higher in protein content than either beef or chicken; you’d have to eat around a pound of soybeans to equal the protein in just three ounces of earthworms. And they’re high in calcium and easy to catch, compared to an agile cricket or a butterfly.

Put that all together and you have pretty much a superfood for birds—and youngsters in particular. Hidden deep in the soil throughout the winter, until a springtime date with destiny, and the beak of an American Robin.

American Robin – More at Audubon’s Guide to North American BirdsWhat Eats Earthworms?Worms As a Food Source for Humans?Earthworm *flour.* Seriously.Here's a chart of the relative nutrition value of a variety of invertebrates…