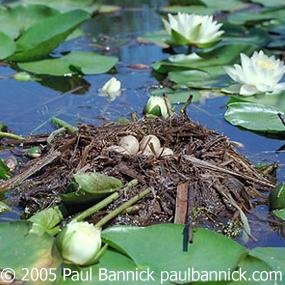 Birds' eggs range in size from the tiny hummingbird egg to the eight-inch egg of the Ostrich. Swifts lay only one or two eggs. Ducks may lay as many as 16 and don't begin to incubate until all eggs are laid, so all the eggs hatch about the same time. Incubation can take as few as 11 days to as many as 11 weeks.
Pictured here: a Pied-billed Grebe's nest. You can learn more about Pied-billed Grebes at All About Birds.

This is BirdNote!
Which came first, the chicken or the egg? We’ll probably never know, but we do know that all birds come from eggs, and that laying and incubating eggs is serious business for wild birds.
[Bird song with American Robin and Swainson’s Thrush featured]
Have you ever noticed a robin’s sky-blue eggshell alongside a path or in your garden? Perhaps you picked it up and marveled at its graceful shape and memorable color. Birds’ eggs range in size from the jellybean-like hummingbird egg to the eight-inch Ostrich egg.
Some birds, such as swifts and albatrosses, lay only one or two eggs. Ducks and quail may lay as many as sixteen. The female lays one egg per day until the clutch is complete. And the parents wait for the entire clutch to be laid before they begin incubating. That’s so all the eggs will hatch about the same time – a process that can take as few as 11 days to as many as 11 weeks.
When ready, the chick pecks its way out, the eggshell falls away, and the miracle of life begins anew.
[Song of the American Robin]
Would you like to receive stunning photos each week of the birds we’ll feature in the week ahead? If so, come to birdnote.org and sign up on the link entitled “Weekly Preview.” For BirdNote, I’m Frank Corrado.
###
Song of the American Robin and Swainson’s Thrush provided by The Macaulay Library of Natural Sounds at the Cornell Lab of Ornithology, Ithaca, New York. American Robin recorded by W.L. Hershberger, Swainson’s Thrush by G.A. Keller.
Ambient tracks provided by C. Peterson.
Producer: John Kessler
Executive Producer: Chris Peterson
© 2010 Tune In to Nature.org        June 2010