First in the morning and the last at night! 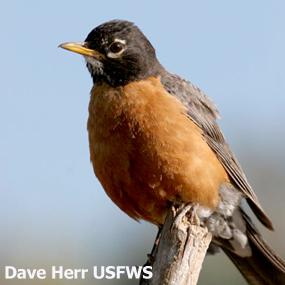 After sunset, the American Robin sings faster and more elaborate versions of his daytime songs. Some birds have more than 100 songs! They time their singing to the intensity of light as well as to the time of sunset. When dark clouds roll in, they get rolling earlier. Males sing mainly to attract a mate and establish and defend a domain. In October, when breeding and raising offspring are all but finished, he sings to remind his neighbors of the boundaries of his territory.

This is BirdNote!
[Sound of a lawn mower winding down, then stopping.]
Ah…you’re finished mowing; finished defining the boundaries of your territory, neat and clear. Time to sit back and enjoy the sounds of evening.
[Sound of children playing outdoors and in the foreground, an American Robin.]
Hear that American Robin? Search the highest vantage point – and you’ll see him belting out his clear and liquid tones. [Repeat American Robin singing] Since he’s done foraging for the day, singing can command his full attention. After sunset, he sings faster and more elaborate versions of his daytime songs.
And how many songs might he sing? Well, some exceed 100!
But have you noticed that robins seem to sing earlier some evenings than others? They time their singing to the intensity of light as well as to the time of sunset. When dark clouds roll in, they get rolling earlier.
[Repeat American Robin singing]
Why draw all this attention, when soon it will be time conceal oneself for the night? The primary reason males sing is to attract a mate and establish and defend a domain. Since breeding and raising offspring are all but finished, he’s reminding his neighbors of the boundaries of his territory. The more neighbors, the more frequently he’s apt to sing.
[Song and whinny of American Robin]
For BirdNote, I’m Frank Corrado.
###
Sounds of the American Robin provided by The Macaulay Library at the Cornell Lab of Ornithology, Ithaca, New York. Song and whinny recorded by G.A. Keller.
Ambient sounds recorded by C. Peterson and Kessler Productions
Producer: John Kessler
Executive Producer: Chris Peterson
© 2010 Tune In to Nature.org    August 2010

American Robin - Learn More at All About Birds