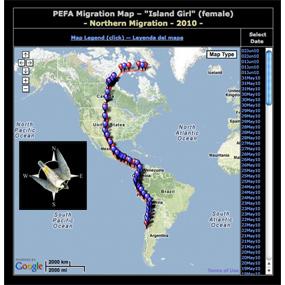 "Peregrine" means "wanderer." And Island Girl, a Peregrine Falcon, has made the 18,000-mile round-trip journey from the high arctic of Canada to southern Chile three times. Bud Anderson of the Falcon Research Group calls her "a master of the air." Using satellite telemetry, he invites people to share in the adventure of Island Girl's journey. With online maps, you can now follow this gorgeous Peregrine in her wanderings. She'll head northward from Chile early to mid-April. Check it out!

This is BirdNote.
[Call of a Peregrine falcon]
Her name is Island Girl. Three times, alone, she’s made the 18,000-mile round-trip journey from the high arctic of Canada to southern Chile. On the way, she has rested on the capitol dome of the state of Illinois. And on oil-rigs miles from shore in the Gulf of Mexico. [Call of Peregrine Falcon] She’s a Peregrine Falcon that biologist Bud Anderson calls “a master of the air.”  [wind]
Anderson has been tracking Peregrine migrations for more than 40 years. Now, using satellite telemetry, he would like people to share in the adventure of Island Girl’s journey.
Marantz Disk II T240 7:45 This is one of the most extraordinary things I’ve ever seen. … You can actually sit at your desk at home… look at our website and Google Earth, and you can track these birds every day. You will know exactly where they are three times a day down to 20 meters… you can see the individual rock the bird’s sitting on, the tree they’re sleeping on at night. You know when they leave Chile. You know how far they travel every day. You know when they arrive in the Arctic. Where they nest. When they head back down. People have wondered where these birds go for thousands of years. [Literally “peregrine” means “wanderer”] And we’re so fortunate now to be living in this time …for the first time in history we know precisely where those birds are going and how long it takes them to get there… It’s just miraculous.

Follow Island Girl as she migrates north!Read about Island Girl's April 2014 departure!More about the Falcon Research GroupPeregrine Falcon - Visit All About Birds