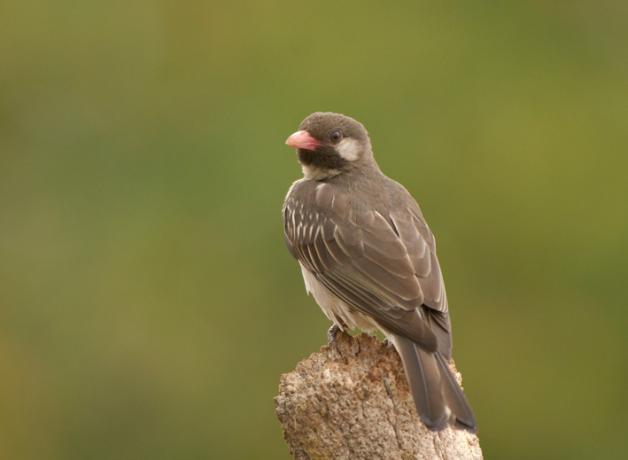 The Greater Honeyguide's demanding call is not aimed at a member of its own species. Instead, the bird guides people in search of honey through the forest, directly to bee hives. The bird flies to a colony of bees living in a hollow tree. The human follower exposes the hive with an ax and takes much of the honeycomb. Then the honeyguide moves in to feast on bee larvae and beeswax.

If you would like to make a gift to BirdNote, begin here.  Thanks!

A sun-drenched morning in Kenya… A sharp chattering penetrates the quiet. It’s the call of a Greater Honeyguide. The small bird flares its tail as it chatters, flashing white spots like a semaphore.

Surprisingly, the honeyguide’s demanding call is not aimed at a member of its own species. The honeyguide, true to its name, uses its calls to guide people who are in search of honey directly to bee-hives.

A man follows the honeyguide’s calls through the forest. Before long, the bird flies upward, toward a colony of bees living in a hollow tree. [honey bees] The man subdues the bees with smoke. Then, exposing the hive with an ax, he takes much of the honeycomb. The honeyguide—a bird that knew where the hive was but couldn’t get at the hive without human help – now moves in to feast on bee larvae and beeswax.

But how does the honeyguide know when humans wish to find honey? In northern Kenya, the Samburu people will first call out to attract the honeyguide. The bird arrives to the human summons, and the teamwork begins. [Greater Honeyguide chattering call]

Some believe the honeyguide’s unique behavior evolved long ago, in conjunction with early humans. However deep the connection, the honeyguide’s story is a remarkable example of cooperative behavior between birds and humans. [Greater Honeyguide chattering call] For BirdNote I’m Michael Stein.

Here's more about honeyguides, from Voice of AmericaSupport BirdNote - make a gift!