© Elizabeth Gow - U. of Saskatchewan

Geolocators are revealing fascinating information about the lives of migratory birds. These devices are so light that they can be mounted on the backs of even small birds like the Wood Thrush pictured here with its nestlings. Thanks to geolocators, we know that many Wood Thrushes return to the U. S. in spring from their neotropical wintering grounds through a narrow span of coastline in Louisiana. With this knowledge, we can better protect the beautiful Wood Thrush and its habitats.

[Call and song of Wood Thrush]

Geolocators are revealing fascinating information about where migrating birds go and how fast they get there. These very light devices can be mounted on the backs of even small birds such as Wood Thrushes. [Partial song of Wood Thrush] They record sunrise and sunset times. This information, coupled with that from a clock in the geolocator, quite precisely marks a bird’s latitude and longitude.

Since 2007 geolocators have enabled some startling discoveries.

“The first geolocator study of a songbird showed that migration rate, particularly in spring, was much faster than previously estimated…” 1/ Some Purple Martins, such as those we’re hearing, traveled from South America to the Northern United States at a rate between three and four hundred miles a day. Previous estimates for the pace of spring migration in songbirds were 30 to 90 miles a day. The tracking devices also show that migration in spring is significantly faster than in fall. 2/

[Song or call of Purple Martin]

Geolocators also identify migratory bottlenecks. For example, many Wood Thrushes return to the U.S. in spring through a very narrow span of coastline in Louisiana, showing the importance of this site for the conservation of this declining species.3/

You can learn more at birdnote.org. I’m Michael Stein.

1, 2 &3/. McKinnon, Emily A. Kevin C. Fraser and Bridget M. Stutchbury, “New Discoveries in Landbird Migration Using Geolocators, and a Flight Plan for the Future.” The Auk An International Journal of Ornithology. Vol.130 No. 2 April 2013. 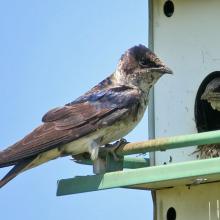 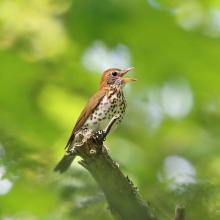 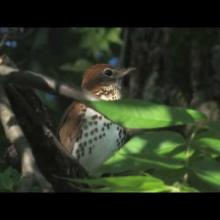 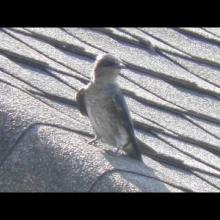 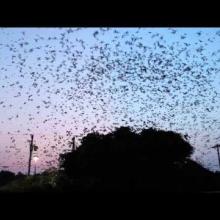