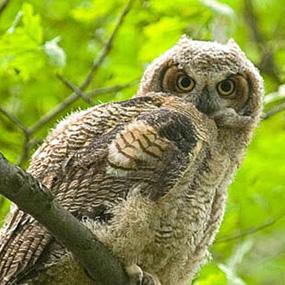 In late September, young Great Horned Owls, now called "juveniles," still roost close together. By mid-October, the juveniles will scatter - or be driven away by the adults - to set up their own territories within a few dozen miles. By age two, they will seek their own mates. Learn about Great Horned Owls in winter and summer, and see what a juvenile looks like.  And learn lots more about this owl at BirdWeb.

This is BirdNote!
[Great Horned Owl pair hooting]
Since January, BirdNote has followed the lives of a family of Great Horned Owls, keeping a watchful eye on their nest in a tall cottonwood: from snowy days, as the female incubated eggs, through many weeks of feeding two downy owlets, to recent months as the young learned to fend for themselves, while still under their parents’ care. [Great Horned Owl pair hooting]
Mid-September approaches; the mornings are chilly. For two weeks, the adults have not offered food to the young, but the owlets, now six months old, have become proficient hunters. These birds, now called “juveniles,” still roost close together, the female owlet half a head taller than the male. Their feathering is a ruddier brown than the adults’; their ear-tufts, a bit shorter.
Within a few weeks, by mid-October, the juveniles will scatter—or be driven away by the adults—to set up their own territories within a few dozen miles. By age two, they will seek their own mates.
For the adults, the cycle will soon begin anew. By early December, their mating calls will again haunt the night, in the moon-shadow of that tall cottonwood tree. [Great Horned Owl pair hooting]
You can see a photo of a Great Horned Owl by photographer Paul Bannick, when you visit our web site, BirdNote.org. I’m Frank Corrado.
###