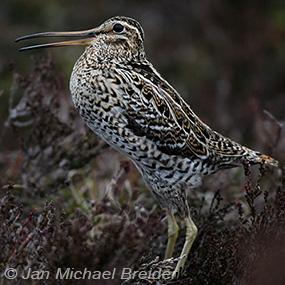 One summer, Swedish ornithologists attached tiny tracking devices to ten Great Snipes. A year later, they found that one bird had flown from Sweden to Central Africa, a distance of 4,225 miles, in just three and a half days. Several bird species are known to fly faster than 60 miles per hour, and many species are known to migrate much farther, but no bird had ever been found to go so far so fast. They're normally silent, except at night on their breeding grounds, when the males engage in noisy communal displays, as seen here.

Adapted from a script by Dennis Paulson

The next time you're driving down the highway, look out your side window and think about how fast you’re really going. 60 miles in just one hour! Wow! Now, imagine when you look out, just outside the window, you see a tiny brown sandpiper flying so fast that it’s keeping up with the car!

It’s a Great Snipe, one of the world’s fastest birds*. During their epic migrations Great Snipes can fly at amazing speeds for hours on end.

Swedish ornithologists attached tiny tracking devices to the backs of some Great Snipes. Much to their surprise, they found that one of the birds had flown from Sweden to Central Africa, in just three and a half days. That’s over four thousand miles!

Most birds with long migrations stop along the way to refuel, but snipes keep the pedal to the metal.

So why haven’t we played any Great Snipe calls? Well, they’re usually silent birds, and it’s likely they don’t call during their migration. But once they arrive at their breeding areas, there’s a lot to talk about.