Not going out on a down note 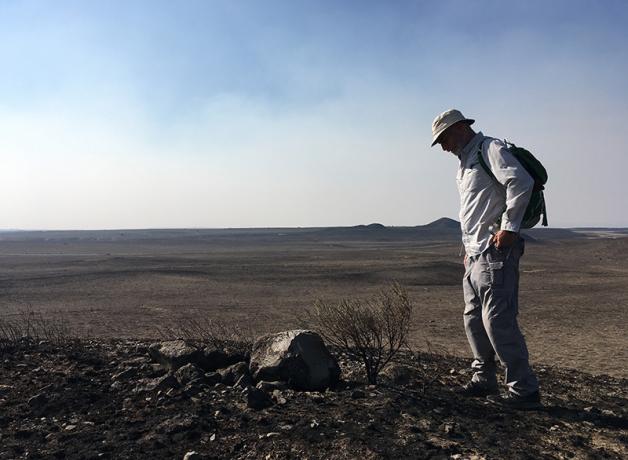 The 2020 wildfire season burned more than 8 million acres in the West, including some of the most important habitat for the Greater Sage-Grouse in Washington State. Ashley Ahearn visited a lek she’d seen in the spring with biologist Michael Schroeder to understand the scope of the damage. But despite the massive challenges, Schroeder isn’t going to retire now — he says he doesn’t want to go out on a down note.

Hear more about Michael Schroeder and the Greater Sage-Grouse in our series Grouse.

I’d been working on a story about the Greater Sage-Grouse for over a year when wildfires broke out across the West. In Washington State, the Cold Springs and Pearl Hill Fires burned several hundred thousand acres in sage-grouse country. So I met up with biologist Michael Schroeder to see how things looked.  He’s been studying the birds here for decades.

He took me to the Mary Jane Hill lek, or mating site. What used to be healthy sagebrush had been transformed into blackened dirt, as far as the eye could see.

Michael: But this was the largest lek in the county. And it's right in the middle of oblivion. Or Mordor, as somebody referred to it, from the Lord of the Rings.

Fire’s a part of this ecosystem, Michael told me…

There are fewer than 1000 sage-grouse left in Washington State, and Schroeder estimates we may have lost half the birds to fire this year. He and other biologists will continue to check sage-grouse leks in the spring to see how the population fared, but he says things look bleak.

Schroeder jokes about being ready to retire, but he told me he’s not going to do that right now. Because, he said, he doesn’t want to go out on a down note.