A Heron Nest Starts with Just One Stick

These parents build the perfect childhood home for their young 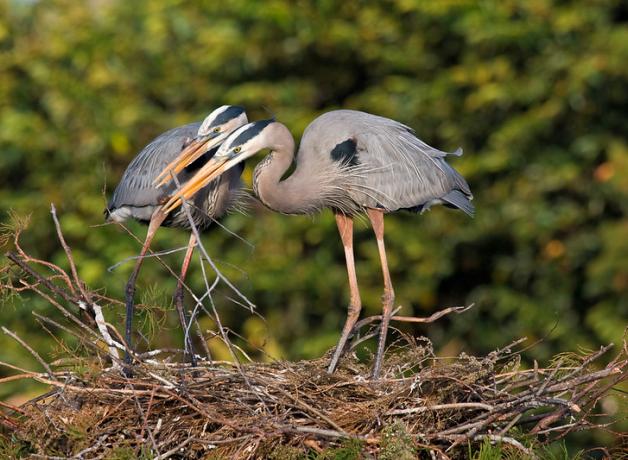 During winter and early spring, Great Blue Herons build their nests high in the treetops. The male delivers the supplies to the nest site stick by stick, as the female arranges things. It’s the perfect childhood home for their young, made without blueprints, architects or engineers. But by early May, the chicks are starting to test the limits of their nests!

A Heron Nest Starts with Just One Stick

Adapted from a script by Chris Peterson

The male heron delivers the supplies — stick by stick — to the nest, as the female arranges things. First, she wedges a strong stick near the main branch of a large fir, spruce or cottonwood tree to make the core of the nest support. Then she adds other sturdy sticks and branches, delivered by her partner. And finally, she weaves more flexible twigs around the base to lock things in place safely for her young.

After she lays her eggs, she and her partner take turns incubating the eggs for 28 days.

By the time they’re six or seven weeks old, the young begin to test the limits of their nest. If they survive predators like eagles, hawks or crows, they’ll grow to full adult size after 60 days or so. Their wing spans will be up to six feet!

Ah! Music to the heron parent’s ears: healthy, growing fledglings, ready to take off. These parents built the perfect childhood home for their young, without blueprints, architects or engineers.

[Sounds of the heron colony again]