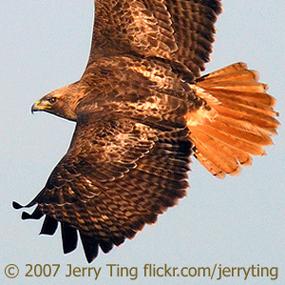 BirdNote writer, Todd Peterson, is also a beekeeper. His spring and summer labors in the apiary have long been accompanied by the cry of Red-tailed Hawks that nest in the woods nearby. If it survives its first two years, a Red-tailed Hawk can live from 10 to 15 years. Red-tails and other birds must have the right habitats to thrive.

[Sound of honey bee colony]
Today, we have with us BirdNote writer, Todd Peterson, who’s also a beekeeper. Here’s Todd:
“For 30 years, I’ve been keeping bees near the beautiful, old, gambrel-roofed barn of a pioneer farm. For as long as I can remember, my spring and summer labor has been accompanied by the cry of Red-tailed Hawks that nest in the woods nearby.
[Cry of a Red-tailed Hawk]
If it survives its first two years, a Red-tailed Hawk can live from 10 to 15 years. So my companions today may be the third generation of those birds I came to recognize three decades ago. [Cry of juvenile Red-tailed Hawk]
As the years have passed, so many of the other places of my life have changed almost beyond recognition, overwhelmed by human development and sprawl.
Human population has exploded around the globe. The march of the strip malls and housing developments seems inexorable. I mourn the natural world that is gone.
But the hawks are still here.
[Cry of a Red-tail Hawk]
What allows these birds to return is that the forest and the fields remain. The same family has owned and farmed the land since 1915.
In 30 years when I am too old to keep bees any more, will the Red-tails still have a forest and fields to come back to, a place to live? I hope so.”
[Cry of juvenile Red-tailed Hawk]
To listen again to this show or any other, go to BirdNote.org.

* Author's note: I haven't found anything in writing that directly states that a nest
site occupied over decades is likely the same lineage.  Palmer's
Handbook of North American Birds says that pair-bonds are typically of
lifelong monogamy, maintained until the death of a partner, and that
acquisition of a new mate can occur rapidly, at least in the breeding
season.  And that in nonmigratory Red-tails mates are closely associated
all year.  My guess is that a pair occupies a nest over a number of
years and, when one dies, a new mate is found - so the nesting pair is
50% changed genetically.  When the other of the original pair dies,
another new mate, and so on.  And when the young fledge, they leave the
natal area.  So the likelihood of a nest being occupied by a direct line
of descendants  might be slim, although the descendants over a sequence
of nests may share a parent.  That's my guess, anyway. 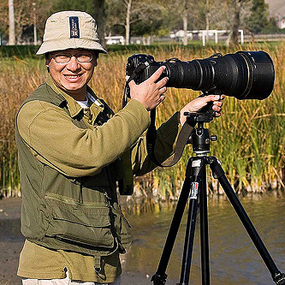 Learn more about the Red-tailed Hawk