Church sparrows got themselves into trouble 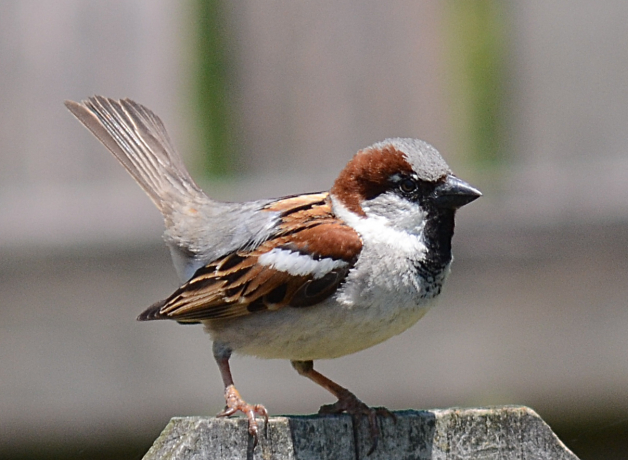 In 1559, Duke August of Saxony ordered that the House Sparrows of Dresden be excommunicated. The birds were slipping into Holy Cross Church, where they interrupted the sermon with exuberant chirping and “endless unchaste behavior” before the altar. Now their manic chirping and courtship displays are heard almost worldwide. This little brown Romeo will puff out his black breast and expose the silvery feathers on his rump. Other males join in, chirping louder and faster as they face off. Look for the sparrows’ dance in your neighborhood … or church!

Today’s show is made possible by donors to BirdNote, who believe that a good story can inspire everyone to care about birds. More at BirdNote.org.

Back in 1559, Duke August of Saxony ordered that the House Sparrows of Dresden be excommunicated.

The familiar birds were slipping into Holy Cross Church and interrupting the sermon with their exuberant chirping — and, as Duke August described it, their “endless unchaste behavior” before the altar.

It’s nearly 500 years later, and they’re still at it. That manic chirping can now be heard almost worldwide. Their cheeping and peeping rings from suburban rooftops, home improvement centers, and yes, even the inside of some churches.

House Sparrows are at their noisiest, and their most endearing, during the male’s courtship
display.  As he struts and spins in front of his intended, the little brown Romeo puffs out his handsome black breast and droops his wings and cocks his tail to expose the silvery feathers of his rump.

Other males soon join in, their chirping growing ever louder and faster as they face off. All the fuss and attention act as a “super-stimulus” to the flattered female.

Look for the sparrows’ underappreciated dance in your neighborhood. It might just be enough to distract you from the sermon, too.