They nest year after year. Are they the same robins? 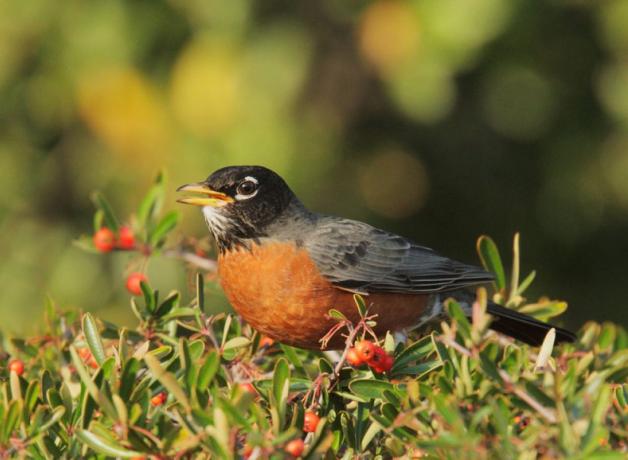 Autumn brings robins to feed on tree fruit and berries. Are the robins you see now the same robins that you saw in your garden last summer? Some robins do remain year 'round. Others spend only the winter, having nested farther north. John James Audubon may have been the first to band birds, in order to learn more about migration. You can learn more about banding birds from the Patuxent Wildlife Research Center.

Support for BirdNote comes from the Cornell Lab’s Bird Academy, with online courses that share the wonder and joy of birds. More at AllAboutBirds.org.

[American Robin singing and definite spring ambient]
This is BirdNote!
[American Robin “whinny” call]
These days bring flocks of American Robins to feed on fruiting trees and berries. Remember last spring when robins sang this lovely song?
[Song of the American Robin]
Could the robins you’re seeing now be the same robins that nested in your garden last spring, or spent the summer pulling worms from your lawn? Robin populations shift and change during the year. Some robins do stay as year-round residents. Others spend only the winter, having nested farther north. During autumn, still other robins pass through in waves on their way south. This hodgepodge of robin populations makes it hard to know where the robin you're seeing now spent the summer.
In the early 1800s, John James Audubon had similar questions about a bird nesting in his garden -- an Eastern Phoebe. He caught the bird and tied a string around its leg -- probably the first example of leg-banding for research. Would it return the next year? It did!
Like Audubon’s phoebe, the American Robin that nested in your garden last spring will likely return to nest there again. And when it does, you’ll hear its cheery song.
[Robin singing]
To learn more about resident, wintering, and migratory robins, find us on the web at BirdNote.org. I’m Mary McCann.