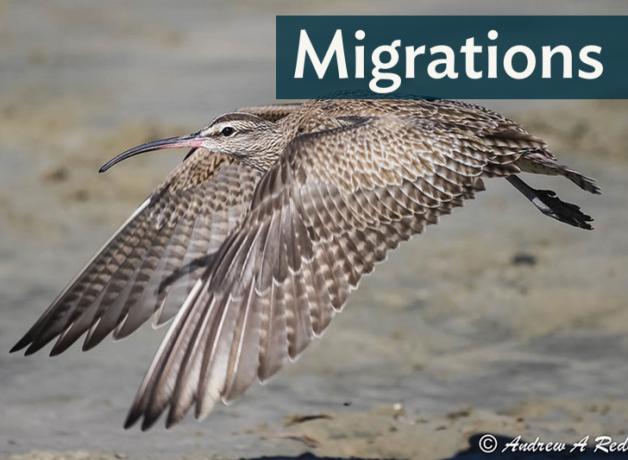 Biologists with Manomet tagged a Whimbrel named Lindsay with a GPS tracker. She has spent the summer breeding in the Arctic National Wildlife Refuge on the northern coast of Alaska. As fall migration begins, she heads straight into a storm in the Gulf of Alaska. The tempest slingshots her toward British Columbia, where she picks up a tailwind down the California coast. Landing near San Francisco, she rests and refuels.

Join us for a panel discussion, "Unraveling the Mysteries of Migration with BirdNote," on Oct. 27th at 7 p.m. ET / 4 p.m. PT! Register and learn more here.

This is BirdNote.
[Whimbrel calls: https://macaulaylibrary.org/asset/167918431]
A Whimbrel named Lindsay has spent the summer breeding in the Arctic National Wildlife Refuge on the northern coast of Alaska. But the seasons change, and it’s time for this shorebird to migrate south for the winter. Lucky for us, biologists with Manomet (MAN-uh-met), a bird research and conservation group, have tagged her with a GPS tracker so that we can follow along.
First, Lindsay flies west across Alaska to spend a couple weeks on the coast packing on fat and building up her flight muscles.
[Whimbrel calls ML207754]
But now Lindsay’s ready to go, launching out over the open ocean of the Gulf of Alaska and heading south.
[Storm ambient]
A storm is brewing. Lindsay flies straight into the swirling currents of the tempest, which slingshot her toward British Columbia. There, she picks up a tailwind and sails down the California coast.
[Whimbrel calls: https://macaulaylibrary.org/asset/167918431]
After traversing more than twenty-three hundred miles over three days of non-stop flight above the open ocean, Lindsay lands safely on the beaches of the Golden Gate National Recreation Area in San Francisco.
[Whimbrel calls ML207754]
Lindsay’s journey, while remarkable, is not uncommon for Whimbrels. For more information about Manomet and shorebird conservation, start at our website: BirdNote dot org.
I’m Mark Bramhill.

Manomet has more...Whimbrels in the ArcticWhimbrel - More at All About Birds