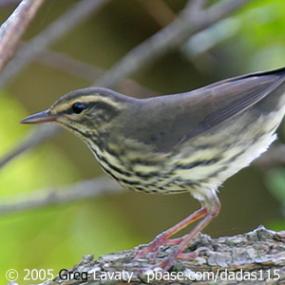 Despite its name, the Northern Waterthrush is really not a thrush: it's a warbler. But unlike most warblers, waterthrushes feed on the ground. They winter in the tropics, where they frequent the edges of ponds and mangrove swamps. Where might you find a Northern Waterthrush? Find out at Cornell's All About Birds. BirdNote is in the news! Read the story.

Would you like to help BirdNote as a volunteer? Find out about opportunities here.

Northern Waterthrush—
The "Thrush" That Is a Warbler