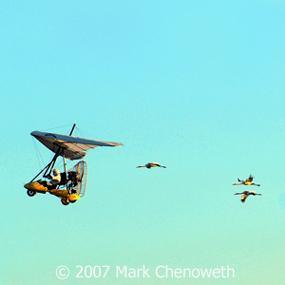 Unlike many other birds that have an inherent sense of direction and destination, young Whooping Cranes have to learn their migration route from the adults. Enter Operation Migration and ultralight aircraft to lead them on their journey! Fortunately, the young cranes need to be shown the way only once. In early 2007, all the young cranes that had made the journey from Wisconsin to Florida died due to a freak storm in Florida.

This is BirdNote!
[Sounds of Whooping Cranes]
The Whooping Crane is one of the most endangered birds in North America. Still, from a low of fifteen birds in 1941, the cranes now number around 500. The only wild flock of Whooping Cranes migrates between Canada and Texas. To ensure the future of the species, biologists seek to establish another wild population that will winter in Florida and breed in Wisconsin.
Unlike many other birds that have an inherent sense of direction and destination, Whooping Cranes have to learn their migration route. But there are not yet enough adults raising young and showing them the way. Enter Operation Migration and ultralight aircraft. [Sounds of an ultralight]
Young cranes, hatched in captivity, hear the sounds of an ultralight’s engine mixed with the brood calls of adult Whooping Cranes. [Sounds of cranes and ultralight]
Pilots shrouded in white carry crane puppets and fly the ultralights that will lead the birds on migration. The trainers basically become the birds’ parents. They exercise the young cranes and lead them on short flights. This training is crucial to the cranes’ success, when they take to the air to follow the ultralight on their first migration. Fortunately, the Whooping Cranes need to be shown the way only once. [Sounds of Whooping Cranes in flight]
Come to our web site, BirdNote.org, to learn more about Operation Migration and this season’s travels. I’m Frank Corrado.
###