These "fish hawks" thrive - with a little help! 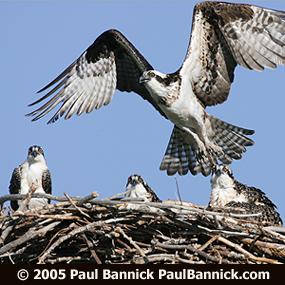 Ospreys, common along the rivers of Pennsylvania, stopped nesting there in the 1950s, due to the effects of DDT. But in 1980, Larry Rymon, a professor of biology, began to restore Ospreys to Pennsylvania. Larry says: "Osprey have been a part of this planet's wildlife for 17 million years. They saw the great glaciers come and go and fished the icy veins, which flowed from the massive ice floes. With our help and support, the Osprey may be able to survive with us as fellow space travelers into the future."

This is BirdNote.
[Vigorous call of Osprey – one or more]
How do you bring back a native bird when it’s been lost for decades from an entire region? Ospreys, fish-eating raptors once common along the rivers of Pennsylvania, stopped nesting there in the 1950s. DDT had thinned their eggshells to breaking, and they died without raising any young.
But in 1980, Larry Rymon, a professor of biology, began to restore Ospreys to Pennsylvania.
[Vigorous calls of several Osprey]
T55; 01:06 Ya  know, these birds have been with us on this planet for millions of years…and then with our modern day chemicals…we destroyed their populations, almost worldwide.
T55 20:145 So it was like reaching out and grabbing something going over Niagara Falls…it’s our one last chance to do something. T55 20:38

Rymon, his students, and other members of the team adapted ancient methods used by falconers to introduce birds to a new location. They constructed artificial nest sites on towers – into which they brought six young birds that had not yet imprinted on a landscape. And to avoid having the nestlings imprint on people, they concealed themselves while caring for the birds and feeding them plenty of raw fish.
The birds thrived. In the fall, they migrated to Latin America, leaving Rymon and his team to wonder: will they return?
Two years later, they did.
[Vigorous call of Osprey]
In 1986, the first Osprey in more than 30 years hatched in Pennsylvania.
Today, a self-sustaining population of about one hundred nesting pairs of Ospreys call Pennsylvania home.
For BirdNote, I’m Michael Stein.
###
Sounds of Osprey provided by The Macaulay Library of Natural Sounds at the Cornell Lab of Ornithology, Ithaca, New York. Calls; call 105731 recorded by G.A. Keller; 106651 recorded by R.S. Little.
Producer: John Kessler
Executive Producer: Chris Peterson
© 2011 Tune In to Nature.org          July 2011     Narrator: Michael Stein

Check out these Osprey recovery stats for PennsylvaniaLearn more about the project!Ospreys - More at All About Birds