Best foot forward: Do Ospreys have a stance preference? 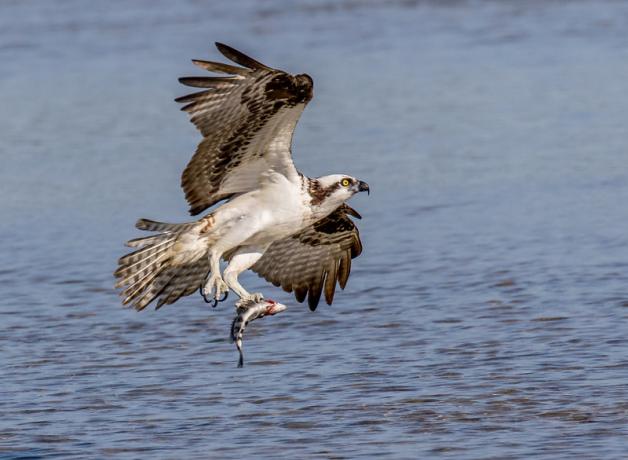 When humans ride a skateboard or snowboard or surf a wave, most prefer the same foot forward every time. A new study finds that Ospreys, too, often exhibit a favorite foot forward in flight.

[sound of a skateboard going for a rip]

If you’ve ever ridden a skateboard, it probably felt natural to favor one foot in front of the other. That’s called a stance preference.

Like us, birds can show a similar preference of one foot – or side – over the other.

Take an Osprey for example. [screech of an Osprey] It dives into the water and sinks its talons into a slick, wiggling fish, then flies off with one foot in front of the other.

But do Ospreys tend to carry fish with their left foot forward or their right? That is, do they have a stance preference?

A team of Seattle neurologists reviewed hundreds of images of Ospreys flying with fish. And they found that the birds tend to carry the fish with their left foot forward around three quarters of the time.

Osprey stance preference may indicate something called lateralized brain function. That’s when one side of the brain is in charge of certain jobs so it can handle more complex tasks.

That’s why humans prefer one foot in front of the other on skateboards.

And maybe it helps an Osprey handle a squirming fish that would rather not be eaten.