Robins Raise a Brood - In a Hurry

A whirlwind of family activity . . . again and again 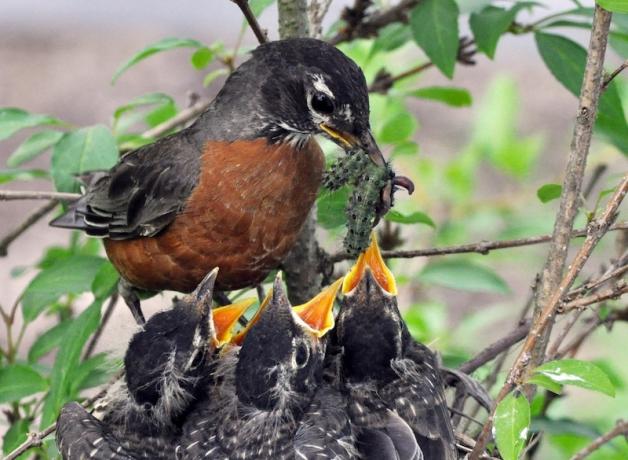 When it comes to raising a family, American Robins have got it down. Approximately eight days after the male and female mate, the female builds the nest.  A few days later, she lays eggs. She sits on the eggs for 18 hours a day, and the eggs hatch in about three weeks. Both parents feed the nestlings until they fledge, then Mom and Dad feed them for another three weeks, until the kids are on their own. Whew! Time for a break, right? Not a chance. Most robins raise two sets of young each season, and sometimes a third.

Robins Raise A Brood – In a Hurry

When it comes to raising a family and getting them out of the house, American Robins have got it - down. [Music]

Day one. A male and female mate in the spring. [Very quick burst of robin song]

Day eight, approximately - the female's built a nest of grass and mud.

A few days later, she's laying. Four days, four eggs. She sits on them for 18 hours a day, and they hatch. It's been about three weeks. [Music]

Both parents frantically feed the nestlings. Each chick, about 40 times a day. More than three pounds of food in total until the Big Day.

The four nestlings hop out of the nest. Mom and Dad tend and feed them for another three weeks, and then…[pause]

They're on their own. Fully fledged at - two months?

Time for the parents to take a well-deserved break, right? [Music]

Not a chance. Most robins raise two sets of young each season, and sometimes a third. [American Robin song, http://macaulaylibrary.org/audio/168300, 0.7-.11]

Today's show brought to you by The Bobolink Foundation. For BirdNote, I'm Michael Stein.

Bird sounds provided by The Macaulay Library of Natural Sounds at the Cornell Lab of Ornithology, Ithaca, New York. Recorded by
'Gay Spirits' by David Rose, performed by David Rose and his Orchestra, from the album 'Holiday for Strings' recorded April 12th 1967
BirdNote’s theme music was composed and played by Nancy Rumbel and John Kessler.
Producer: John Kessler
Executive Producer: Dominic Black
© 2015 Tune In to Nature.org    May 2018   Narrator: Michael Stein