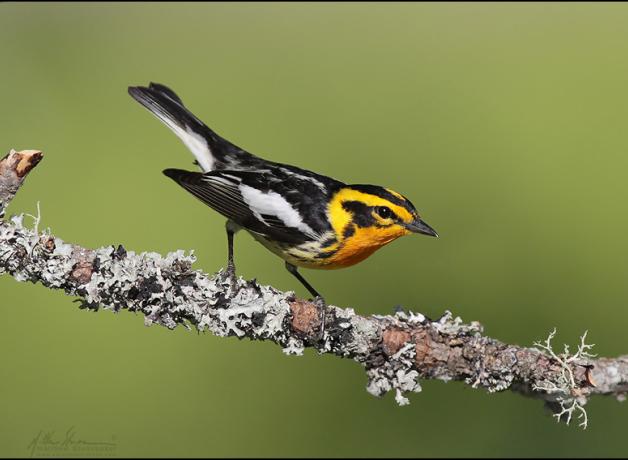 In the United States and Canada, International Migratory Bird Day (IMBD) is celebrated in May. Justin Pepper of the Audubon Chicago Region shares his insights about this special time of year, when birds like this Blackburnian Warbler are on the move. “It’s awe inspiring to realize that our neighborhoods are playing a critical role in supporting this incredible movement,” he says. “And it reminds you to pause and to realize this is a big and complicated world that we live in – we don’t have it all figured out, and that’s fine!”

Interview and story by Chris Peterson

[Spring morning in an eastern forest]

Justin Pepper, acting director of Audubon Chicago Region, remembers the thrill of watching PBS stories on the great migration of wildebeest in East Africa. But then he discovered an equally impressive migration through his own backyard.

“There are these incredible jewels that come sweeping through the tree tops in spring and in fall…[song of Magnolia Warbler]. You may have Magnolia Warblers, or American Redstarts or Blackburnian Warblers may be comin’ through.”

“Occasionally as I’m walking in to work, someone will stop and see me staring up into a treetop in the spring and…yell out “Warblers?” It’s nice to be reminded that we all can choose to connect up with this…”[song of Yellow Warbler].

“And it just reminds you to pause and to realize this is a big and complicated world that we live in – we don’t have it all figured out, and that’s fine!”

Many communities will hold International Migratory Bird Day events during the next few weeks. Find links at birdnote.org. [return to spring in an eastern forest at dawn]

Search for an IMBD event near you at BirdDay.orgFind your local Audubon chapter and check out special events, classes and field…