Scarlet Tanagers Under the Canopy

This visitor from the tropics may be hidden in plain sight! 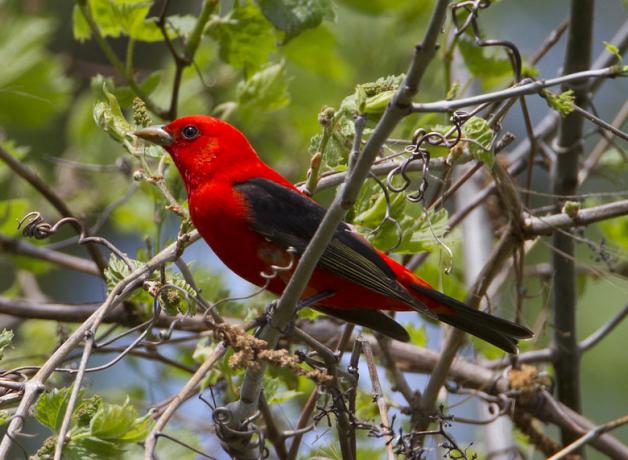 In summer, the forests of the eastern United States are home to a bounty of birds, including this gorgeous Scarlet Tanager, which spends most of the year in tropical South America. The male’s body is a dazzling red, in contrast to his black wings and tail. It seems that these boldly colored birds might offer an easy target for a birdwatcher’s watchful gaze, but male Scarlet Tanagers can be hard to spot!

Scarlet Tanagers Under the Canopy

In summer, the forests of the eastern United States are home to a bounty of birds. Birds – intriguing, attractive, mellifluous, or mysterious. But there’s one bird in particular that, nearly every time its name comes up, you hear the word “gorgeous”: the Scarlet Tanager. [Scarlet Tanager song]

The male Scarlet Tanager is a deep, dazzling red, glowing with the luster of velvet. His entire seven-inch body is feathered in scarlet, in bold contrast to his black wings and tail. [Scarlet Tanager song] This resplendent summer visitor spends most of the year in tropical South America, as far south as Ecuador and Bolivia.

Scarlet Tanagers nest within large tracts of mature forest, where they forage for insects under the shelter of the tree canopy. It seems that such boldly colored birds might offer an easy target for predators, or for a birdwatcher’s watchful gaze. But, though brilliant scarlet when viewed in the open, male Scarlet Tanagers are remarkably hard to spot when perched among the branches overhead. The contrasting bright and dark colors mimic summer’s pattern of light and shadow within the canopy. Thus the bird is often concealed.

So that gorgeous visitor from the tropics may well be hidden in plain sight! 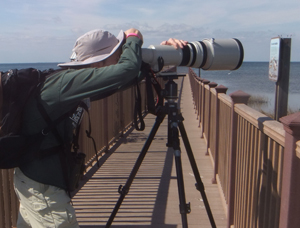 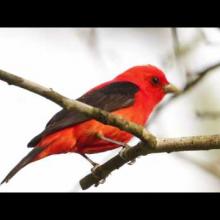