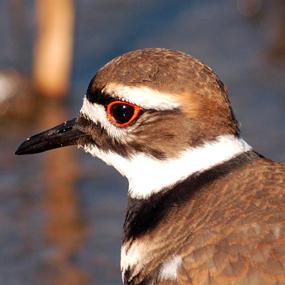 The Killdeer is a sentinel bird, one especially alert to predators. They can see you — or a fox — from a long distance. They keep out of harm's way while warning all the other Killdeers in the area of your presence. Black-necked Stilts and American Avocets also sound alarm calls. Loud, distracting, and very communicative, sentinel birds inform everyone in the area that a predator is present. And they tell the predator that it has been seen and it might just be time to find a quieter neighborhood.

[Killdeer alarm calls and the sound of walking on beach]

Uh-oh, we must have walked into a nesting territory! That’s the loud and strident call of a “sentinel” bird, in this case, a Killdeer. There it is, flying around and over our heads.

Yes, these calls are arresting and annoying, but imagine what it would be like to be a fox hunting for the Killdeer’s nest! [More intense Killdeer alarm calls “kill-deer”]

Killdeers are sentinel birds, birds that seem especially alert to predators. Birds of open country, they can see you—or that fox—coming from a long distance. Good fliers, they can keep out of harm’s way while warning all the other Killdeers in the area of your presence. But Killdeers aren’t the only sentinel birds. [Black-necked Stilt and American Avocet alarm calls]

The kek kek kek calls of Black-necked Stilts [Black-necked Stilt alarm call] and the pleep calls of American Avocets [American Avocet alarm calls] function in the same way. Loud, distracting, and very communicative, they serve to inform everyone in the area that a predator is present. Perhaps just as important, they tell the predator that it has been seen, everyone is now aware of its presence, and it might just be time to find a quieter neighborhood. [Killdeer alarm calls “kill-deer”]

See a photo of a Killdeer and catch a video of avocets and Black-necked Stilts on our website, BirdNote.org. I’m Michael Stein. 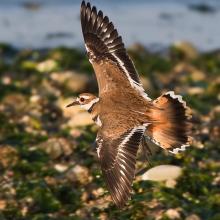 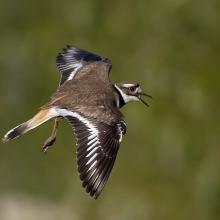 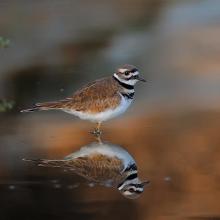 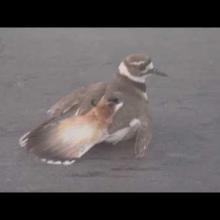 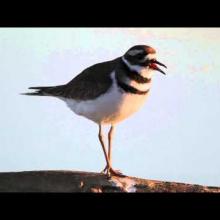