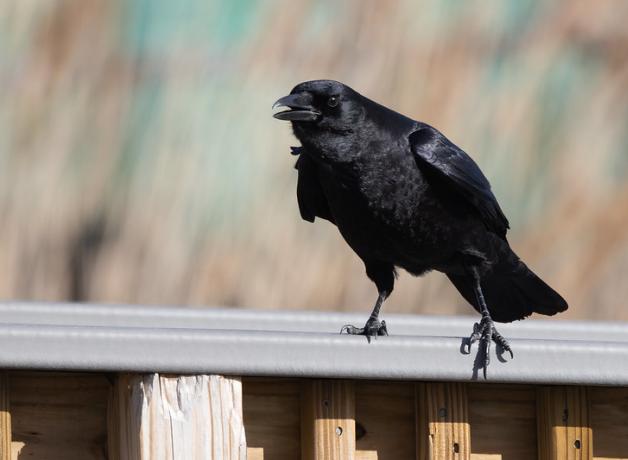 When Dr. Kaeli Swift was in college, she became obsessed with the Corvid family of birds, which includes crows, ravens and jays. She decided to study whether crows learn to recognize certain human faces as friendly. She tried putting a mask on a mannequin holding peanuts, but the crows spotted the trick right away. Swift had to find a creative solution.

When Dr. Kaeli Swift was in college studying biology, she became obsessed with the Corvid family of birds, including crows and ravens and jays.

Kaeli Swift: I realized what an amazing opportunity corvids pose in terms of being able to ask really interesting questions about animal behavior and sociality and cognition, all that kind of stuff.

Mark Bramhill: And for her senior thesis, Swift decided to do a variation on a famous study about crows. In that study, someone in a Halloween mask heckled crows, and the crows remembered that face and avoided it.

Kaeli Swift: What I ended up doing was sort of the inverse of that study, which was: in a more positive context, are crows also learning and remembering human faces?

Mark Bramhill: But there was a challenge:

Kaeli Swift: Recognizing somebody threatening is an association they would make right away!

Mark Bramhill: Being recognized as a friend? That takes more time. But with only a semester to build a relationship, she needed a way to accelerate this, having someone cozy up with the crows 24/7. And then she had an idea: we'll put a mannequin on a roof, put a mask on it, and give it a basket of peanuts.

Kaeli Swift: And like before you know, these birds, anytime they see that face, they're going to be like, Oh, you're my roof buddy. Perfect. Such a great idea. Right? No, of course it was a disaster they absolutely knew this wasn't a real person. They just needed to watch for a little bit of time. And then they went, huh? This thing never, ever moves. It's not real. And so then of course, when we just took the mask and we put it in an animated person that moved around, they were like, yeah, no, thanks.  So I was like, crap!

Mark Bramhill: The solution Swift found? Find somebody who had already been feeding crows for years and make a mask of their face.

Kaeli Swift: It really illustrates just how much creativity is involved in scientific research. We think of the scientific method as this very sort of uptight, sterilized process. But it's also a really artistic and creative endeavor.

Mark Bramhill: You can follow Kaeli on Twitter @CorvidResearch to learn lots more about these brainy birds. For BirdNote, I’m Mark Bramhill.

Crows: Are They Scary Or Just Scary-Smart?Do Birds Remember Faces?American Crow – More at All About BirdsFollow Dr. Swift on Twitter for more corvid research