A novelist learns to love crows. 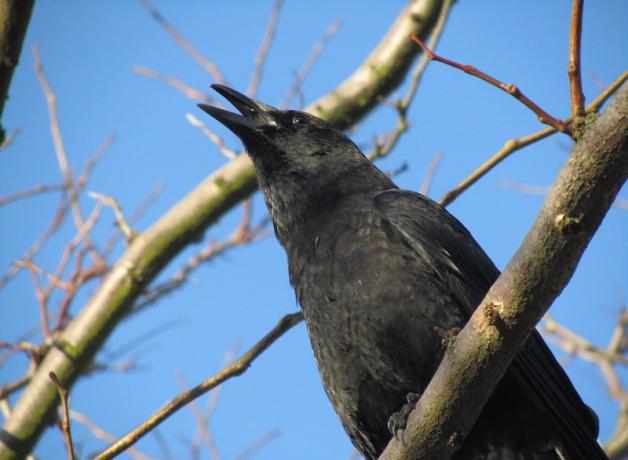 Kira Jane Buxton wrote two novels about a foul-mouthed pet crow navigating the extinction of humanity. But her love for crows began just a few years before writing the books. She found an injured crow surrounded by 60 others calling out in alarm. Though Kira was nervous, she took the crow to a wildlife rehabilitator. Sadly, the crow didn’t survive. But since then, Kira has bonded with her local crows and visits them regularly.

Kira Jane Buxton is the author of Hollow Kingdom and Feral Creatures, two novels about a foul-mouthed pet crow named S.T., navigating the extinction of humanity, learning to bridge between the worlds of domestic and wild animals. The books are love letters to the city of Seattle and the American Crow. But Kira’s love for crows didn't start until a few years before writing the books.

Kira Jane Buxton: I was walking my dog and there was an injured crow.

Its wing was backward. And in the trees all around were about 60 crows who were just screaming for this family member. And I was very nervous to approach, because I had no experience with crows. And you know, the general consensus about crows is quite negative. They're seen as harbingers of death. Um, also I'm blonde. So I thought this might be a kind of Tippi Hedren moment.

But I got a box and approached this poor little injured crow. And it looked at me and I looked at this crow, and I just had this feeling that the crow understood I was there to help and not to harm. And so I ushered this little crow into the box, and all the crows went silent. And this is 60 crows, just silent watching.

Kira Jane Buxton: But after that, I had a completely different relationship with the local crows. I would go on these walks, and they would follow me.

Mark Bramhill: All these crows helped inspire her light-hearted apocalyptic novels. You can learn more at our website, BirdNote.org. I'm Mark Bramhill.