A special relationship with a wild Red-tailed Hawk. 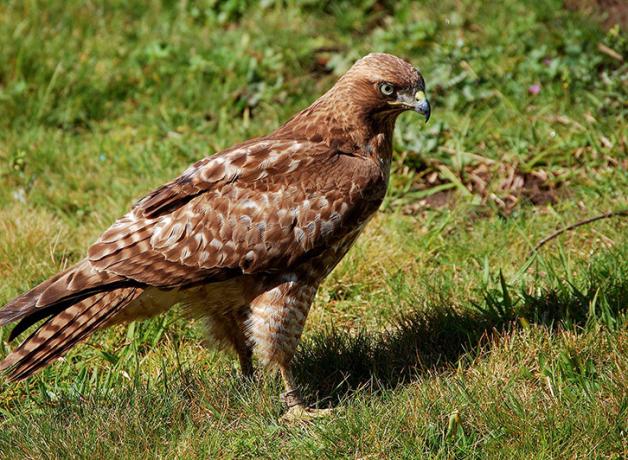 Sculptor and musician Walter Kitundu first became enraptured by birds in 2005 when a Red-tailed Hawk flew four feet above his head. He named the bird Patch, after the white patch on the back of her head, and kept returning to the park to see her. Patch became used to Walter, accepting him as part of the landscape. He documented her transition from juvenile to adult, learning her quirks and mannerisms.

See some of Walter’s amazing photos of Patch here!

Sculptor and musician Walter Kitundu first became enraptured by birds in 2005 when he borrowed a camera from a friend. He went to Alta Plaza Park in San Francisco to try photographing hummingbirds, when all of a sudden a Red-tailed Hawk…

Walter Kitundu: Flew about four feet above my head. And I turned around and I started following this hawk all around the park.

Walter Kitundu: This one was particularly big. And had a white patch on the back of its head.

Mark Bramhill: Walter named the bird Patch and kept coming back to the park to look at this hawk. And on one of his visits, he saw the bird on top of a streetlight.

Walter Kitundu: And it turned, looked at me and then jumped off the streetlight and flew straight toward my head. And in my mind, I'm thinking I've done something wrong. The bird is really mad.

Walter Kitundu: The bird landed on the ground next to me, about three or four feet away. And it picked up a caterpillar and ate it, and then it didn't leave.

We sat there together on the ground for about a minute until somebody else walked by and it flew away. And that was such an exhilarating moment that probably for the next six to seven months I was at that park, three to four days a week, following this particular Red-tail. Some days it'd be more difficult to find her and other days, she would find me.

Walter Kitundu: The bird wasn't used to everybody, but for some reason it had accepted me as part of the landscape. It would pluck gophers out of the field, right next to me. It would allow me to walk up to it while it was feeding. And when a dog would run by or another person would walk by, it would fly away. So I realized I had a really privileged relationship with a wild Red-tailed Hawk. And I think, knowing that it was so special, I kept going back, and I was able to document its transition from a juvenile bird into an adult.

Mark Bramhill: As he watched Patch grow, he noticed things about her — how some days she would seem to never miss her prey, while others she’d fly around endlessly looking for a meal. How her favorite perch was on the cross atop a church next to the park.

Walter Kitundu: She had particularly quirks and personalities and preferences, and those were really brought into stark relief. Whenever I saw another Red-tailed Hawk come into the park, because you could tell their behavior was different. Their mannerisms were different. And it was really striking because I could understand that these are individuals, just like you can tell your friend apart at a distance from someone else that you don't know, I could tell this hawk apart at a distance from other hawks.

Mark Bramhill: Patch passed away in 2010, but seeing a Red-tailed Hawk is still special for Walter, reminding him of an old friend.

Walter Kitundu: If I'm ever really nervous, maybe I'm going to a performance or I have to go give a talk. And on the way there I look out and I see a Red-tail perched on the edge of a building or on a power pole or something, I just settled down a little bit. I kind of realize part of the world is as it should be and things are going to be okay. So there is a kind of comfort that I receive whenever I see a Red-tailed Hawk.

Mark Bramhill: Music for this episode is by Walter — it’s called “First Light.” You can see some of Walter’s amazing photos of Patch on our website, BirdNote.org. I’m Mark Bramhill.