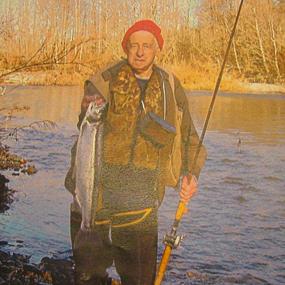 In the late 1970s in Washington State, bulldozers began mining gravel on the banks of the most productive steelhead fishing spot on the Snohomish River. This raised the ire of Bob Heirman and his local sportsmen's club. They took on Dave Beck, Jr., head of the mining company and son of the Teamsters' Union president - and they won! In the process, Bob created a refuge for Trumpeter Swans, now known as the Bob Heirman Wildlife Preserve, a haven for fish, fishermen, and swans. Visit the park's website and learn more about this wildlife preserve.

This is BirdNote.
(Sound of steelhead splashing in a river and fishing reel)
This is a story of how one man’s love of a river led him to protect a fishing hole famous for its steelhead trout. In the process, he created a safe haven for Trumpeter Swans.
(Bulldozers moving earth) June 05 G5
It’s the late 1970s in Washington State. Bulldozers have begun mining gravel on the banks of the most productive steelhead fishing spot on the Snohomish River. This raises the ire of Bob Heirman and his local sportsmen’s club. They take on Dave Beck, Jr., head of the mining company and son of the Teamsters’ Union president.
Bob recalls Beck saying: ‘This is a gravel operation…If it’s a fight you want we’re going to give it to you’
Undaunted, Bob went from agency to agency challenging Beck’s mining permit. Then he engaged the nearby Tulalip Tribes.
G2T7:37 “I went to the Tulalip headquarters and I said, ‘They’re ripping up the river at Thomas’s Eddy…’
The tribe took Beck to court and won.
Next, Bob worked with the county to create a protected area, a 343-acre park that includes a lake where swans now gather at night.
G2T72:04 They love that spot because it’s sheltered, ya know, and they’re kinda safe in there and they’ve got the bank on one side...they need a big flyway…
Now on a winter evening, flight after flight of Trumpeter Swans returns to The Bob Heirman Wildlife Park, a haven for fish, fishermen and swans.
(Calls of Trumpeter Swans)
For more on this story visit our website BirdNote.org.
###
Calls of the Trumpter Swans recorded by C.Peterson.
River ambient recorded by Kessler Productions.
Producer: John Kessler
Executive Producer: Chris Peterson
© 2011 Tune In to Nature.org       March 2011   Narrator: Michael Stein