The Warbler That Loves Pines

A bird that sings year-round. 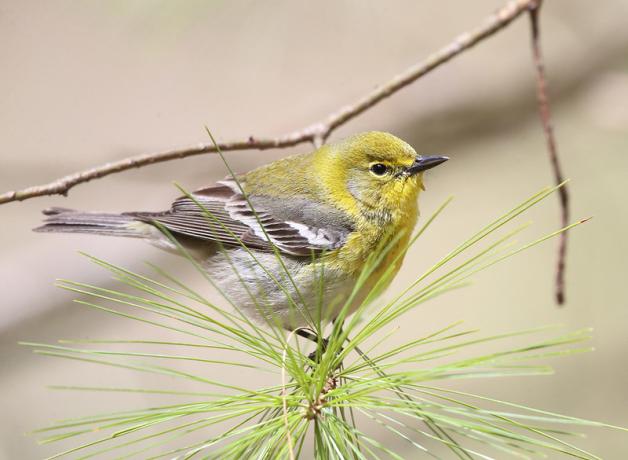 The Pine Warbler is one of the few warblers that make appearances at bird feeders. They live year round in pine forests of the southeast U.S. and several Caribbean islands. Early spring is a good time to see them migrating through cities in the Midwest and the East Coast. If there’s a pine or two nearby, look for them picking through pine needles for food. Their song, heard throughout the year, is a sweet-sounding trill.

The Warbler That Loves Pines

Most warblers don’t make appearances at bird feeders, but Pine Warblers often do. They’re unique among warblers in their fondness for seeds. You can find them year-round in pine forests of the southeast U.S., the Bahamas, Haiti, and the Dominican Republic. And if you know where to look this spring, you have a good chance of seeing them migrate through cities in the Midwest and East Coast.

If there’s a pine or two in a nearby park or backyard, look for a small, agile bird picking through needles for caterpillars, insects and seeds. And listen for its song, a sweet-sounding trill of about two seconds.

Pine Warblers have a yellowish neck, with the yellow reaching down to the belly on the males. Their backs are olive green, their wings black with white wing bars.

True to their name, Pine Warblers spend most of their lives in pine trees, where they find their food and make their nests out of twigs, needles and spiderwebs.

This quirky warbler is also unique in its tendency to sing every month of the year. So whether they only pass through your neck of the woods while migrating or are year-round residents, you can enjoy the Pine Warbler’s sweet little trills.