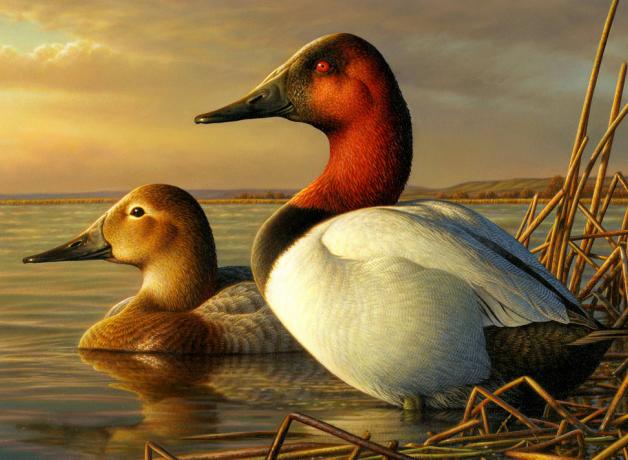 While nearly a third of North American bird species are in decline, many birds that depend on wetlands are thriving. Duck breeding populations in 2009 were an estimated 25% above historical averages. Conditions on the breeding grounds have improved since the drought years of the 1980s, but human action has also made a huge difference. You can help by purchasing a duck stamp every year. Adam Grimm's painting of a pair of Canvasbacks won the contest for the 2014-2015 duck stamp.
Support for BirdNote comes from Seattle’s Portage Bay Café & catering. Serving local, organic food as part of their commitment to the environment. Info at portagebaycafé.com.

BirdNote®
Wetland Birds Thrive
Written by Todd Peterson
This is BirdNote.
[Dawn song of birds in a freshwater marsh]
While nearly a third of North American bird species are in decline, many birds that depend on wetlands are thriving. [Call of Redheads]
The main determinant of duck breeding success is the condition of wetlands and upland habitat on the prairies and in the boreal forest. After the extended droughts of the 1980s, conditions on the breeding grounds improved when the rains returned. And, waterfowl hunters, through organizations like Ducks Unlimited, have provided hundreds of millions of dollars to conserve and restore wetlands.

It’s not just ducks that benefit. Nearly one quarter of US birds, such as this Virginia Rail, rely on freshwater wetlands. [Calls of Virginia Rail]
Yes, challenges remain. Breeding habitat in the prairie pothole region is under increasing pressure for conversion to agriculture. But wetland birds respond to our efforts. For example, in spring, in wetland-rich areas protected by conservation programs in the Dakotas, you can find more than 100 breeding pairs of ducks on a single square mile of prairie. [Quacking of hen Mallard]
Learn more at Birdnote.org.
Support for BirdNote comes from Seattle’s Portage Bay Café & catering. Serving local, organic food as part of their commitment to the environment. Info at portagebaycafé.com.

You don't have to be a hunter to buy a duck stamp!Check out the duck stamp art for 2019-2020Canvasback — More at the Audubon Guide to North American BirdsCanvasback - More at All About Birds 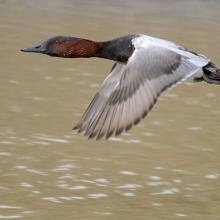 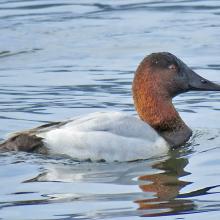 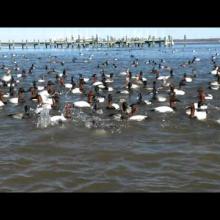 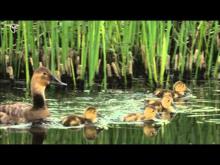