What Birds Can Hear in Songs

a long story in a short song... the Winter Wren 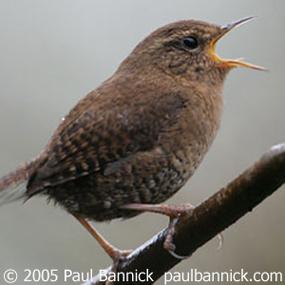 What does the Winter Wren hear in a song? It's a long story... What we hear as a blur of sound, the bird hears as a precise sequence of sounds, the visual equivalent of seeing a movie as a series of still pictures. That birds can hear the fine structure of song so acutely allows them to convey much information in a short sound. Winter Wrens are found most often in closed-canopy conifer forests, nesting in cavities, usually within six feet of the ground. Learn more about this versatile songster at Cornell's AllAboutBirds.

What Birds Can Hear in Songs:
A Long Story in a Short Song
...What the Winter Wren Hears

This is BirdNote!
Listen carefully to the song of the Winter Wren.
[Song of the Winter Wren*]
What we hear as a blur of sound, the Winter Wren hears as a precise sequence of sounds, the visual equivalent of seeing a moving film as a series of still pictures.
That birds can hear so acutely the fine structure of song allows them to convey much information in a short sound. “This is probably why," naturalist Rosemary Jellis writes, "even the most extensive bird songs seem so brief to us. The bird with its speeded-up time sense must feel as if it had sung the equivalent of an operatic aria.”
Let's listen again, but this time with the song slowed down to one-quarter speed.
[Song of the Winter Wren at 1/4 speed]
Winter Wrens may hear the song of other Winter Wrens this way, enabling them to imitate each other – reminding us that creatures with which we share the world read and respond to nature in ways we sometimes cannot see or hear.
[Song of Winter Wren at full speed again]
You can see a photo of a Winter Wren in full song by coming to our web site, BirdNote.org.  I’m Frank Corrado.
###
Song of the Winter Wren provided by The Macaulay Library of Natural Sounds at the Cornell Lab of Ornithology, Ithaca, New York. Recorded by G.A. Keller.
Producer: John Kessler
Executive Producer: Chris Peterson
© 2010 tune in to nature.org    October 2010

The Winter Wren has been taxonomically split into three species since this piece was written and recorded. The wren you hear is the Pacific Wren, the species of far western North America.

More about the Winter Wren at All About Birds