Why Robin Has a Red Breast

According to the Suquamish myth... 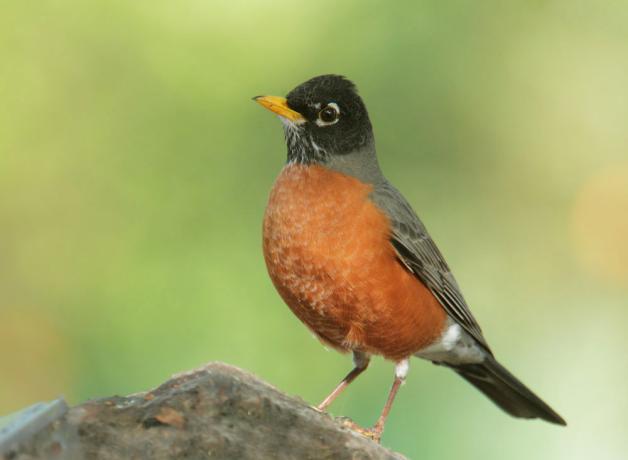 According to the Suquamish story, many years ago, South Wind blew hot and long. The animals banded together and found the source of the wind - a fortress atop a rocky mountain. At night, the animals crept into the fortress and vanquished the men who protected the South Wind. Afterward, the animals all danced around the fire. All except Robin, who refused to join the dance. He sat quietly, staring into the fire, and stayed there for so long that his breast turned red. And Robin has had a red breast to this day.

Why Robin Has a Red Breast

This is BirdNote!
[Blend in wind sounds, Steller’s Jay, and Robin]
Why the Robin has a Red Breast, from the Suquamish [pronounced s’-KWAH-mish] tradition.
Many, many years ago, South Wind blew hot and long. This made the animals uncomfortable, even in the shade. Jay complained and loudly scolded South Wind. Finally Squirrel decided something had to be done, so he gathered the animals together. After a long hard journey south, they found the source of the wind—a fortress atop a rocky mountain. Mouse climbed up the mountain and crept into the fortress. There he learned that five brothers were responsible for the strong South Wind. Those brothers had bows and arrows to defend the fortress.
At night, when the brothers were asleep, Mouse nibbled free their bowstrings and wove a long ladder so the rest of the animals could climb into the fortress. When the brothers awoke, they struggled with the animals but without their bows, they were weak, and the animals prevailed.
The animals rejoiced and built a large fire with the bows and arrows. They all danced around the fire except for Robin, who refused to join the dancing. He sat quietly, staring into the fire, and stayed there for so long that his breast turned red. And the robin has had a red breast to this day.
###
Animal audio provided by The Macaulay Library of Natural Sounds at the Cornell Lab of Ornithology, Ithaca, New York. American Robin song and gnawing sound of Eastern Gray Squirrel recorded by W. L. Hershberger.  Steller’s Jay recorded by G.A. Keller.
Producer: John Kessler
Executive Producer: Chris Peterson
© 2012 Tune In to Nature.org     December 2012     Narrator:  Frank Corrado.

American Robin - More at All About Birds